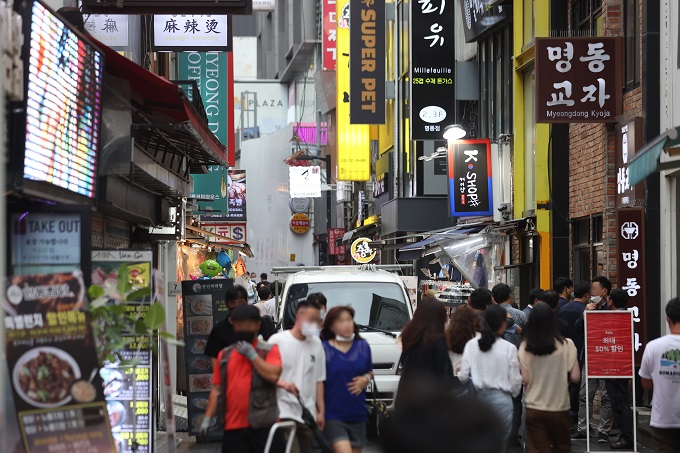 The central shopping district of Myeongdong in Seoul is busy with people on June 29, 2022. (Yonhap)

SEOUL, July 3 (Korea Bizwire) — South Korea’s new coronavirus cases stayed above 10,000 for the second consecutive day Sunday as the daily cases seemed to be rising again after months of subsiding.

The country added 10,059 COVID-19 infections, including 191 cases from overseas, bringing the total caseload to 18,389,611, the Korea Disease Control and Prevention Agency (KDCA) said.

The number of critically ill patients stood at 53, the KDCA said.

South Korea’s COVID-19 outbreaks have shown a downward trend after daily new cases peaked at an all-time high of over 620,000 in mid-March.

But the KDCA has said the pace of decline has recently slowed down amid waning vaccine immunity and increasing social interactions following eased social distancing rules, and that a possible spike in infections lies ahead.

Imported cases have remained above 100 since June 24 due to a rise in international flights.

Of the 9,868 locally transmitted cases, Seoul accounted for 2,437 cases, with the surrounding Gyeonggi Province reporting 2,637 cases.

There were 516 infections in Incheon, 40 kilometers west of Seoul. The greater Seoul area accounted for 56 percent of the total caseload.