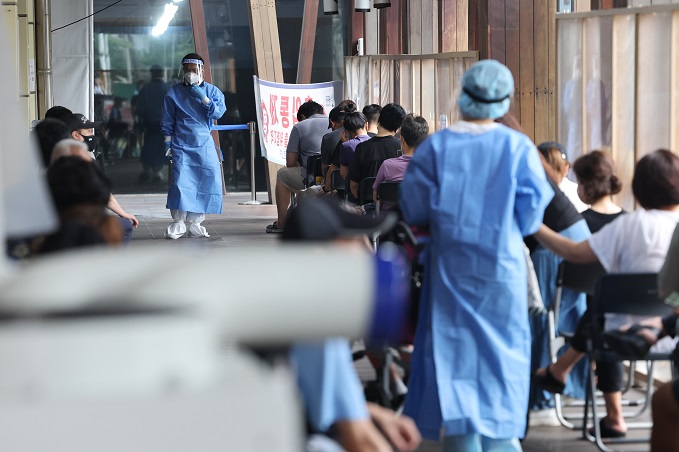 A COVID-19 testing station in Seoul is crowded with people who seek to undergo virus tests on July 14, 2022. (Yonhap)

SEOUL, July 15 (Korea Bizwire) — South Korea’s new coronavirus cases more than doubled in a week again on Friday to near 40,000 amid the fast spread of a highly contagious new omicron subvariant.

The country added 38,882 new COVID-19 infections, including 261 from overseas, bringing the total caseload to 18,680,142, the Korea Disease Control and Prevention Agency (KDCA) said.

Friday’s figure more than doubled from 19,308 new cases logged a week earlier, as the country has seen a marked growth in infections from end-June due to the highly contagious omicron subvariant BA.5.

The KDCA reported 16 deaths from the virus Friday, putting the death toll at 24,712. The fatality rate stood at 0.13 percent.

The number of critically ill patients came to 65, down from the previous day’s 69.

As of 9 p.m. on Friday, South Korea reported new 39,404 infections, up 2,270 from the same period a day earlier and the largest tally for a Friday in 11 weeks, according to local governments and health authorities.

The KDCA has said the country has entered a new virus wave, ending a downward trend from the peak of more than 620,000 in mid-March, and that the daily infections could surge to over 200,000 next month.

The BA.5 subvariant had accounted for 35 percent of the country’s total COVID-19 cases last week, up from 28.2 percent a week earlier, according to the KDCA.

It is known to be more contagious and better able to escape immunity compared with earlier versions.

Concerns about the fast spread have grown further as South Korea confirmed its first case of a new highly-mutated omicron variant, BA.2.75, Thursday.

Some scientists say BA.2.75, nicknamed “Centaurus,” could be the most contagious variant seen yet and better evade any immunity from previous infections and vaccines. 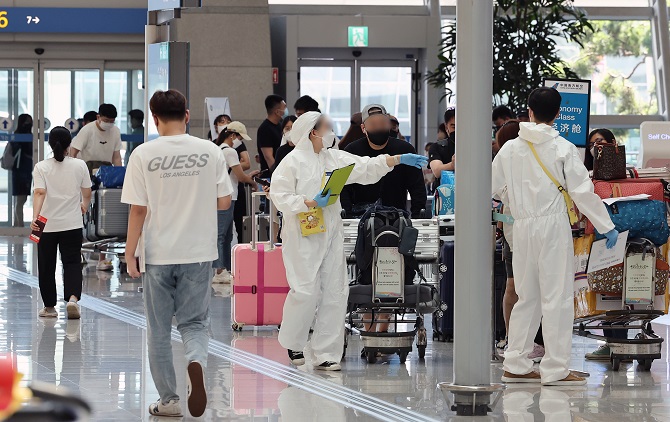 The departure lobby of the first terminal of Incheon International Airport, west of Seoul, bustles with overseas travelers on July 14, 2022, amid the resurgence of COVID-19 infections nationwide. (Yonhap)

As more people will travel in the summer vacation season, the government pledged to strengthen disinfection efforts at airports and major tourist destinations by mobilizing nearly 3,000 workers.

In response to the growth in infections among inbound travelers, the government has decided to strengthen quarantine rules by advising them to receive the polymerase chain reaction (PCR) test on the day of their arrival, rather than within three days, and to stay home until their test results are available.

Starting next week, the government will administer the fourth COVID-19 vaccine shot to people aged 50 and older, as well as people aged 18 and older who have underlying health conditions, to prevent the growth in serious cases.

Currently, the fourth dose is reserved for those in their 60s and older and those with an immune disorder.

Despite the advent of a new virus wave, the government decided not to reinstate strict social distancing rules as it “seeks to balance people’s everyday lives and antivirus efforts,” the KDCA said.

The number of seriously ill patients and deaths from COVID-19 has remained at a relatively stable level, and the country can manage the virus situation under the current medical system, it added.