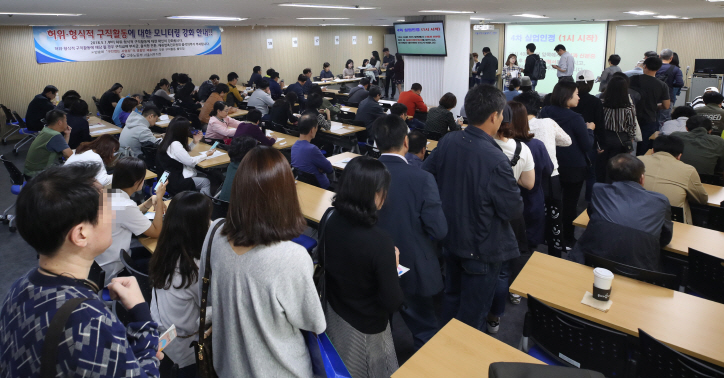 People wait in line to hear about unemployment benefits in Seoul. (image: Yonhap)

SEOUL, Oct. 14 (Korea Bizwire) – South Korea’s jobless numbers in the third quarter surpassed the 1 million mark for the first time since the country struggled with the fallout of the Asian financial crisis, government data showed Sunday.

Numbers released by Statistics Korea showed the average monthly unemployment stood slightly over 1.06 million in the July-September period, up a sharp 102,000 from a year earlier.

This is the highest reading for the third quarter since 1.33 million reported in 1999, when the country was still reeling from the worldwide economic meltdown two years earlier.

The statistical agency said that there have been other times that the quarterly jobless figure exceeded 1 million, but these occurred in the first or second quarters, which are the hiring seasons in Asia’s fourth-largest economy, with more people looking for employment. Usually jobseekers fall off beginning in the third quarter, causing unemployment numbers to decline as well.

A rise in joblessness indicates an increase in the number of people unable to find work relative to those joining the labor force, and shows how hard it is to land a job.

In addition, the employment rate for the country in the three months that ended Sept. 30 stood at 61.1 percent, down 0.3 percentage point on-year, and again the sharpest decline since the 0.5 percentage point fall tallied in the first quarter of 2010.

The latest numbers represents the second quarter in a row that employment figures have headed south.

Market watchers said disappointing quarterly numbers are impacting overall hiring, with newly hired people in 2018 hitting just 101,000 as of last month, the poorest showing since some 108,000 jobs were lost in 2009.

In the January-September period, jobless numbers reached 1.11 million, the highest tallied after 2000, when related data was first compiled by the government, with the jobless rate in the same period reaching 4 percent, again the highest since 4.2 percent in 2001.

Since the local job market generally tends to hire fewer people in the winter months, overall figures for this year are unlikely to improve.

Reflecting such circumstances, Seoul recently announced a move to hire some 5,000 short-term intern workers in the public sector, which might alleviate some problems, at least in the short run.

For the long term, rising trade disputes between the United States and China, U.S. rate hikes and financial market uncertainties in emerging markets could all weigh down hiring. The slow pace of recovery in South Korea’s shipbuilding and auto market could further limit job growth numbers.