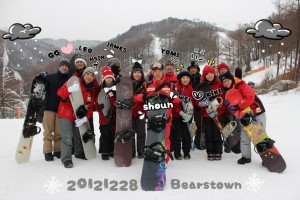 Some parts of China and South-Eastern nations of Asia cannot see snow throughout the year whereas a lot of snow falls in Korea. (image: IRO Tour)

GYEONGGI-DO, Korea, Nov 26 (Korea Bizwire) – Pocheon-Ski resorts of Korea are now one of the Korean wave factors whose main agent has been K-POP so far. Previously, visitors from South-East Asia flocked to Myeong-dong or Gang-nam in Seoul.

Now, they are swarming to ski resorts in Korea in the winter season. Some parts of China and South-Eastern nations of Asia cannot see snow throughout the year whereas a lot of snow falls in Korea. Ski tour in Korea has now become one of the Korean wave factors.

Naturally, ski tour packages for foreigners emerged in Korea. The case in point is Shoun’s Ski Team’s ski tour package for absolute beginners at skiing from other countries.

Shoun (SONG IL HO) made Shoun’s Ski Team and launched ‘Shoun’s Ski/Snowboard lesson,’ ‘Fibo’s Ski lesson,’ and ‘Ski Tour in Bearstown Ski Resort’ which run from the 4th week of November this year to the 2nd week of March next year.

Shoun Ski Team’s instructor ‘Fibo’ can speak four different languages – Chinese, Korean, English and Japanese. ‘Shoun’ also can speak Korean and English. The multilingual instructors will help visitors from abroad enjoy ski tours in Korea. In particular, ‘Shoun’ has been skiing since 1995 and worked as a ski instructor in Australia back in 2007. He is particularly known for his passionate attitude in teaching classes. At a forum on one famous travel website of Taiwan (Backpackers.com.tw), you can see many favorable comments on his class. People say that his two-hour class will allow ski beginners to get on a ski lift and enjoy skiing by himself/herself.

Ski classes are available at Pocheon Bearstown in Gyeonggido which is an hour-distance from Seoul. Among many slopes in Bearstown, ‘Little Bear’ is a perfect choice for a complete novice at skiing to practice more safely and thoroughly.

Meanwhile, on the website of IRO Tour (www.irotour.com), you can get a variety of information on ski tours and trip to Jeju Island. The website also offers information on guided tours for visitors who want more flexible schedules for Jeju tour where you can experience Korean culture, food and leisure sports.

One thought on “Safe and Easy Ski Tour in Korea: ‘IRO Tour’ with Shoun & Fibo”