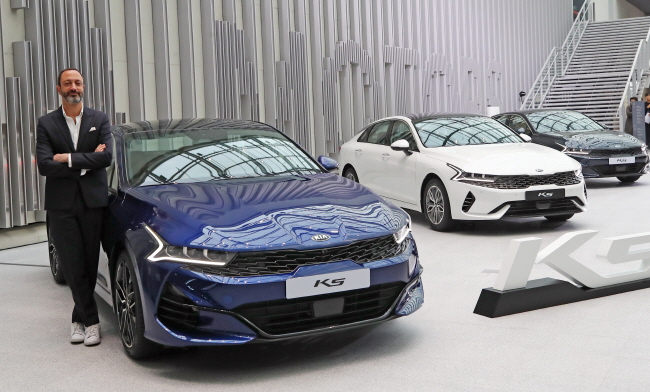 Karim Habib, who was appointed the Kia Motors’ new design chief in September, poses with the all-new K5 at the company’s Vision Square in Yongin, Gyeonggi Province on Nov. 21, 2019. (Yonhap)

SEOUL, Dec. 1 (Korea Bizwire) — Sales of Kia Motors Corp.’s K series midsized and large sedans are on course to reach a milestone with cumulative sales expected to exceed 5.5 million vehicles in 10 years since launching the brand, according to the carmaker Sunday.

Kia Motors, which began selling the K7 large sedan in 2009, has sold 5.48 million vehicles of the K3 compact cars, K5 midsize sedans, and K7 and K9 large sedans so far this year.

This year, Kia Motors started selling the face-lifted K7 sedan, called the Cadenza in the United States, in South Korea.

It also has a bold character line that runs up along the sides that Kia claims exudes both power and elegance.

At the rear, the side character line trails into the back and merges with the rear lamp graphics. The roof has a bit of a fastback look, ending at the trunk lid.

Kia Motors has sold about 7,000 units of the upgraded K7 sedan per month.