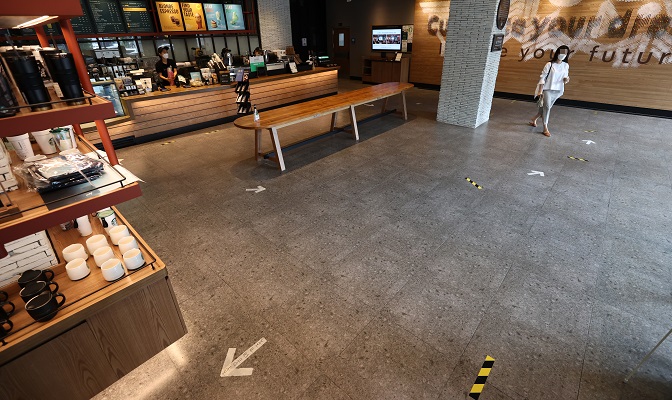 This photo taken on Aug. 31, 2020, shows a coffee franchise outlet in Seoul with tables and seats taken away in line with the government’s stricter social distancing guidelines. (Yonhap)

In a sharp contrast, sales of retail stores plunged as people opted to stay at home and order online due to coronavirus fears.

On Sunday, South Korea began to restrict operations of restaurants, bakeries and franchise coffee chains in the greater Seoul area in an effort to contain the spread of the new coronavirus.

The move comes as the number of daily virus cases has stayed in the triple digits for more than two weeks.

On Monday, South Korea reported 248 new COVID-19 cases, including 238 local infections, raising the total caseload to 19,947, according to the Korea Centers for Disease Control and Prevention.

Stricter social distancing measures pushed up sales of online shopping malls and delivery-focused stores but drove down sales of offline stores such as coffee franchises, large discount store chains and department stores, according to distribution companies. 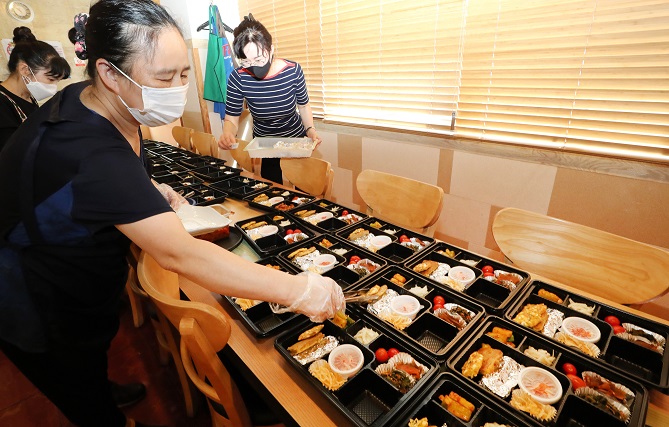 Lotte and Shinsegae Department Store said their sales fell 24 percent and 28 percent on Sunday compared to a week earlier.

Retail outlets and department stores expect the COVID-19 pandemic and stricter social distancing measures will inevitably continue to weigh on consumer sentiment and their sales for the time being.

U.S. coffee giant Starbucks, which operates 1,438 stores in South Korea, said sales at their 900 stores in the greater Seoul area were mainly affected by the stricter distancing plan which will last through Sept. 6.

“The stricter measures are having an impact on our sales, and we will be able to release how much the measures affected our sales at the end of this week,” a Starbucks spokesman said.

The number of delivery orders for cafe beverages and desserts increased 10 percent on Sunday from a week earlier, according to delivery app Baedal Minjok, or Baemin.

Other delivery orders are expected to increase in the coming week as restaurants and bakeries can operate until 9 p.m., and only takeaway and delivery will be permitted from 9 p.m. to 5 a.m.

For franchise coffee stores, only takeout or delivery are permitted regardless of operating hours, as cluster infections traced to coffee shops have been reported.

The operators of convenience store chains, such as GS25, CU and 7-Eleven, advised chiefs of their franchise outlets in the greater capital region not to operate indoor eating spaces from 9 p.m. to 5 a.m. in line with the stricter social distancing.

GS25 said it will not run outdoor tables and chairs. It will also prevent people from gathering and eating during the cited hours. 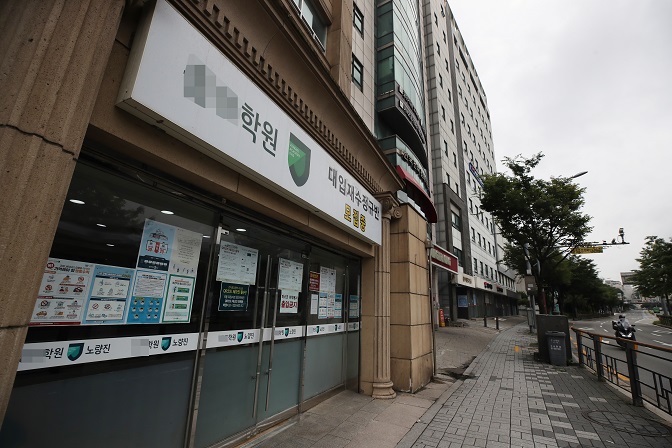 The stricter measure is part of the government’s strengthened virus curbs in the greater Seoul area, home to half of the country’s 51 million population, as the country is struggling to curb spiking virus cases.

South Korea has also begun to suspend the operation of indoor sports facilities, including fitness centers and billiard halls, in the wake of virus infections at indoor sports centers.

The government also expanded no-assembly orders from large academies to almost all cram schools in the wider Seoul area. Only online lectures will be permitted.

Starting Aug. 19, the government placed the capital area under Level 2 social distancing guidelines, the second highest in a three-tier system, for two weeks, banning indoor gatherings of 50 or more people and outdoor events of 100 or more people.

The government expanded the distancing level to affect all of South Korea in late August.

Level Three calls for restricting all outdoor activities except for essential social and economic purposes. Gatherings of 10 or more people are not permitted, and all sports events are suspended.