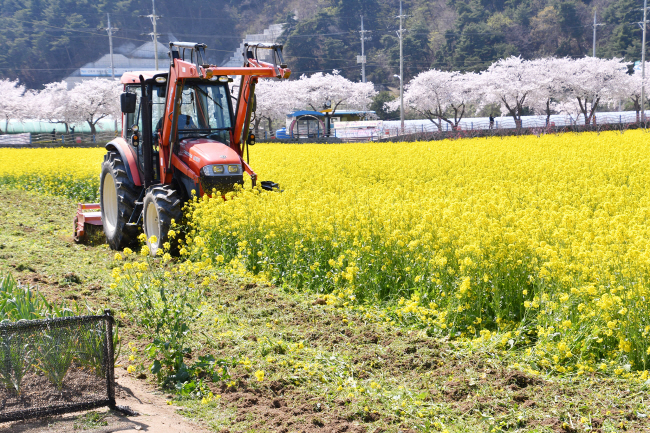 SAMCHEOK, April 6 (Korea Bizwire) — The municipality of Samcheok in Gangwon Province plowed up canola flowers amid a rising influx of spring travelers, as part of efforts to limit the coronavirus outbreak.

The measure comes after the cancellation of the annual canola festival and entry restrictions to the canola field.

Cars entering the old No.7 national highway, decorated with canola flowers and cherry blossoms, are required to pass through without stopping or parking midway.

Despite city measures, many travelers were seen parking their cars at the entrance of the village to take photos in the canola field.

“Local villagers, most of whom are seniors, are more concerned about coronavirus infections as more visitors come by,” said a city official.

These concerns have led the city to plow up the canola field before the weekend, when more visitors are expected to come.

The city deployed four tractors to plow up the canola flowers on Friday. The task began at 1:20 p.m. and ended after three hours.

Samcheok’s famous canola flowers bloom across 5.5 hectares of land beside the old No.7 national highway, 7.8 times larger than a football field, the site of the annual Samcheok Canola Flowers Festival.

The 19th Samcheok Canola Flowers Festival, originally scheduled to run from March 23 to April 28, was cancelled due to the coronavirus outbreak.

The city imposed entry restrictions on the flower fields since March 27 as visitors continued to visit despite the cancellation of all festivities.