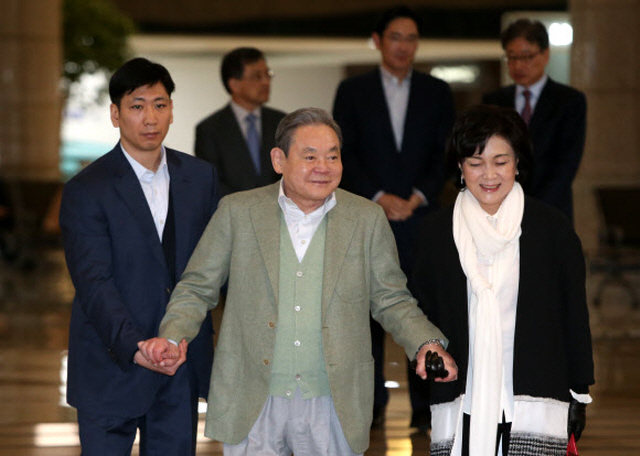 SEOUL, Dec. 27 (Korea Bizwire) — Samsung Electronics Chairman Lee Kun-hee has seen the value of his stock assets rise by nearly 4 trillion won (US$3.7 billion) this year thanks to a rally of the tech giant on the local bourse, a market tracker said Wednesday.

According to CEO Score, Lee, who has been hospitalized since May 2014 after he suffered a heart attack, had 18.1 trillion won in stock holdings as of Friday, up 3.9 trillion won from a year earlier.

Lee is the sole South Korean whose stock holdings are valued at 10 trillion won or more.

He was followed by Suh Kyung-bae, the president of top cosmetics maker AmorePacific Corp., with 8.1 trillion won and Lee Jae-yong, Lee’s only son and Samsung Electronics vice chairman, with 7.6 trillion won.

The younger Lee has been in prison on bribery and other charges since February. In late August, he was handed down a five-year jail term for bribing Choi Soon-sil, a longtime friend and confidante of impeached former President Park Geun-hye, embezzling company money and hiding assets overseas. He is appealing the verdict.

The jump in Seo’s stock assets came on the listing of Celltrion Healthcare and the planned move of Celltrion to the main stock market from the tech-laden KOSDAQ market early next year.

The data also showed the value of stocks held by South Korea’s 500 richest people standing at 159.2 trillion won as of Friday, up 28 percent from the start of the year.

It accounted for 8.5 percent of the total stock market capitalization and was higher than the 20.5 percent gain in the benchmark stock index over the cited period.