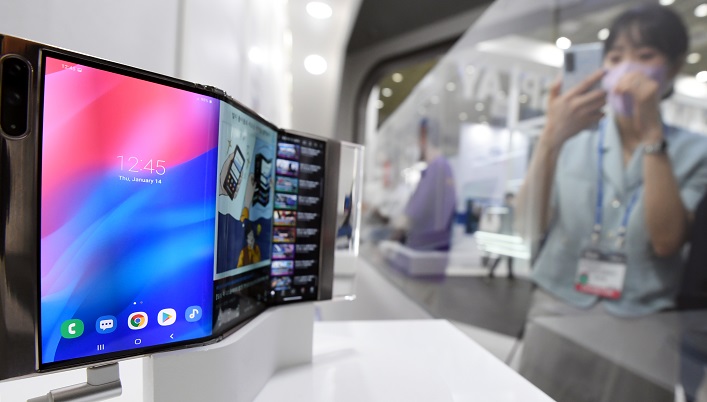 This file photo taken on Aug. 25, 2021, shows Samsung Display’s foldable smartphone panel displayed at the company’s booth at an exhibition in Seoul. (Yonhap)

SEOUL, Oct. 5 (Korea Bizwire) — Samsung Display Co., a major display panel maker in South Korea, dominated the global smartphone panel market in the first half of the year, a report showed Tuesday, though its market share declined slightly from a year earlier.

Samsung Display, an affiliate of top smartphone maker Samsung Electronics Co., grabbed a 48 percent revenue share in the global smartphone display panel market in the first six months of 2021, down from a 50 percent share a year earlier, according to a report from market researcher Strategy Analytics.

The global smartphone display panel market posted revenue of US$21 billion in the first half, up from $18.6 billion a year earlier.

“The smartphone display panel market grew on the back of continued demand from handset manufacturers who expanded the application of OLED panels in mid and high-tier smartphones,” Jeffrey Mathews, a senior analyst at Strategy Analytics, said.