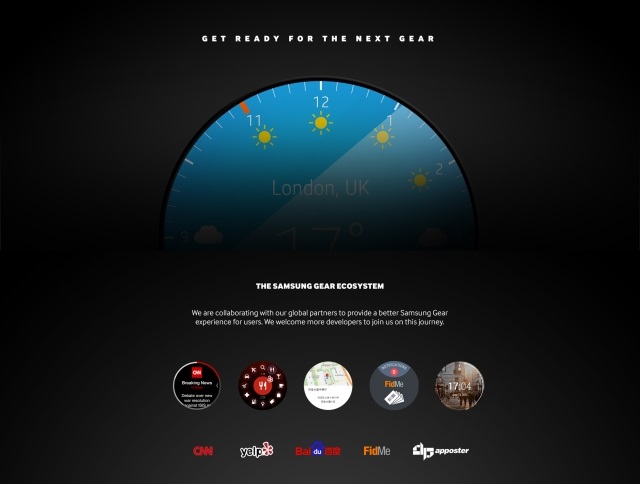 The poster, which reads “Get Ready For The Next Gear,” shows what appears to be a round smartwatch, which would be Samsung’s first wearable device of its kind. Its previous Galaxy Gear smartwatches boast a rectangular screen. (image: Samsung Electronics)

SEOUL, April 24 (Korea Bizwire) — Samsung Electronics, South Korea’s No. 1 tech giant, uploaded a poster of a seemingly round watch screen on its website on Friday implying that its next smartwatch’s shape will be circular.

The poster, which reads “Get Ready For The Next Gear,” shows what appears to be a round smartwatch, which would be Samsung’s first wearable device of its kind. Its previous Galaxy Gear smartwatches boast a rectangular screen.

Samsung, however, did not provide any hints on detailed specifications nor the launch schedule of a new smartwatch.

While some had expected it to release another smartwatch earlier upon the introduction of its latest high-end smartphones — the Galaxy S6 and the Galaxy S6 Edge, the firm did not do so, in an apparent bid to focus on promoting groundbreaking technologies of the new models.

Samsung’s U.S. rival Apple, meanwhile, commenced its sales of the Apple Watch around the globe Friday. The Apple’s first smartwatch reportedly sold out in just six hours for the initial preorders.

Meanwhile, Samsung said it will allow developers to access its software development kit to help them build applications for the soon-to-be released Gear wearable device.

It is the first time that Samsung has released its wearable software development kit to third-party developers before the official product announcement.

“We are collaborating with our global partners to provide a better Samsung Gear experience for users,” the poster also said. “We welcome more developers to join us on this journey.”