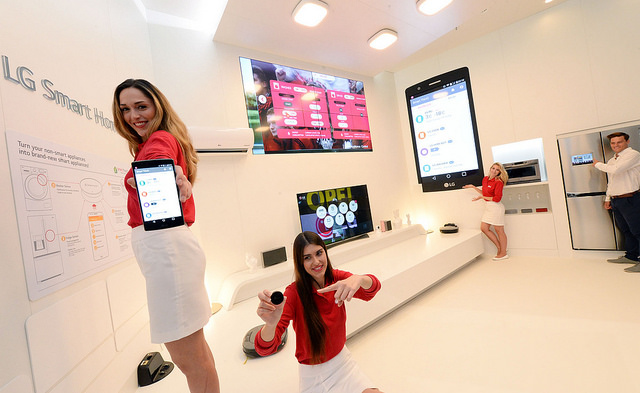 Some of their latest white goods and gadgets come laced with quirky rigs that are odd enough to pique consumers’ interest at home and abroad. (image: LG Electronics)

Recently, they’ve embarked on an unlooked-for venture that seems quite off the track — going somewhat bizarre with their items.

Some of their latest white goods and gadgets come laced with quirky rigs that are odd enough to pique consumers’ interest at home and abroad. And market watchers say they are poised to shake up the industry, where it’s becoming harder for manufacturers to predict and satisfy customers’ likings.

LG Electronics has been most unconventional in its dare. Two weeks ago, the company released the LG Rolly, a portable keyboard for tablet users that literally gets “rolled up” around its body into a rectangular stick to easily chuck into a bag, taking up the least amount of space.

The peripheral runs on a Bluetooth connection, allowing itself to be automatically turned on as it is unfurled near a tablet PC.

After investing eight long years of efforts, its home appliance division has developed a washer that comes with an extra mini-washer at the pedestal, allowing it to handle two loads of washing in two separate drums simultaneously. The mini-washer also offers a shorter and cleaner cycle for smaller and delicate clothes.

It has a Wi-Fi connection compatible with LG’s smart-home ThinQ app for cycle alerts and a Near Field Communication (NFC) function for the user to set specific cycles.

LG’s hard work seems to have borne fruit. Its domestic sales surged five times the daily average sales of its flagship 21kg-washers during the preorder period, according to the company. Its August sales jumped, reaching about three times the overall monthly average figure.

Jun Shi-moon, an LG executive who spearheaded the Twin Wash project, called the machine “a washer that is like nothing in the world.”

“We’re aiming for 10 percent (of the entire washer sales) with the premium Twin Wash,” he told reporters at a recent press meeting in Changwon, a provincial city south of Seoul, where LG Electronics’ main production lines are located.

Samsung Electronics has been busy bringing its own uniqueness into washing machines. The top-load Samsung Active Wash climbed to the top of Samsung’s flagship washers list in South Korea only a few months after its February release, with the sales reaching over 100,000 units in the first five months, the company said.

Its built-in basin, placed underneath the lid of the washer, was innovative as it allows the user to pre-wash laundry to remove nasty stains before emptying them into the main spinner.

Such a feature, derived from the idea of lifting the burden of scrubbing clothes in a kitchen or bathroom sink and carrying them dripping to the washer, was well-received in the U.S., being included in the top-picks list on ConsumerReports.org and Reviewed.com.

The tech giant took a step further by introducing another washer early last week that has an additional door at the front. The Add Window of Samsung’s new Bubble Shot Add Wash helps the user to shove extra laundry into a cycle that’s already running.

Market watchers say that such a string of out-of-the-ordinary items underscores a tendency that consumers are becoming more complicated and diverse about what they want.

“While it’s not at all new that consumers always look for something different, now they’re attracted to an item that can be highly practical and that can make their lives easier,” a recent report by KT Economics & Business Institute said.

Such a pursuit of practicality is what has prompted the tech companies to read consumers’ minds more carefully, it said, as much as they were in dire need to revamp their lineups to distinguish themselves from rivals.

“Some of these innovative products come in a hybrid form, a mix-up of features designed to meet consumer expectations.”

Before Samsung created the Add Wash, it conducted its own consumer research, which found that about 90 percent of people in Europe wished they could add more clothes to a cycle.

LG did its own survey on consumers here, who apparently said they would be willing to buy an electronics appliance with a function to remove food or cigarette odors, or steam-dry their clothes. So it came up with its clothing care system, LG Styler, a virtual wardrobe that is designed to freshen up non-washable clothes.

The Styler has drawn keen interest in China and will soon be rolled out in the U.S., LG said last week. It is also planning a launch of the Twin Wash in the two countries before the end of the year.