LG began to sell its new CodeZero ThinQ A9S stick vacuum cleaner in South Korea that comes with a charging station, which automatically cleans out the dustbin.

When the vacuum cleaner is docked in the stand, which LG calls it “all-in-one tower,” the contents of the dustbin container are automatically sucked into the charging station and collected in an attached 2.5-liter dust bag.

Users are recommended to replace the bag once every three months, the company added.

LG said the settings of the charging station can be easily controlled via its full touch display, while checking the dustbin and power status of the vacuum cleaner.

LG added the charging station also provides space efficiency as it can store various accessories and nozzles inside the stand.

The latest vacuum cleaner, which was first unveiled at the all-digital Consumer Electronics Show (CES) 2021, can be easily switched from a vacuum to a mop. It can operate up to two hours when using two fully charged batteries in standard mode.

LG will sell the vacuum cleaner with a price tag of 1.53 million won (US$1,360) in South Korea and plans to add more color options.

LG said the vacuum cleaner, also called the CordZero ThinQ A9 Kompressor+ in overseas markets, will be launched in other countries later. 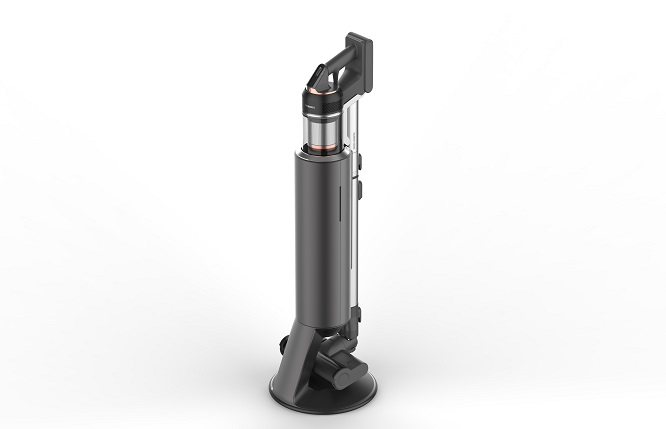 Samsung said its new vacuum cleaner combined with the enhanced charging station will be launched in South Korea next month.

The 2021 version of the Samsung Jet stick vacuum cleaner comes with the Clean Station, which also features an automatic dust cleaning system.

Samsung previously sold the Clean Station stand separately, but since the cleaning accessory became so popular, the company decided to sell it together with the vacuum cleaner.

Since the Clean Station hit the local shelves in March last year, Samsung said its Jet vacuum cleaner sales doubled from a year ago.

In particular, 88 percent of consumers who bought its Jet vacuum cleaner in the second half of 2020, also purchased the Clean Station together, Samsung added.

The company has yet to reveal detailed specifications and the price of its new Jet 95 stick vacuum cleaner, although it did unveil the product at the CES 2021 last month.

Samsung said it has applied 14 patents related with the latest vacuum cleaner and its charging station.