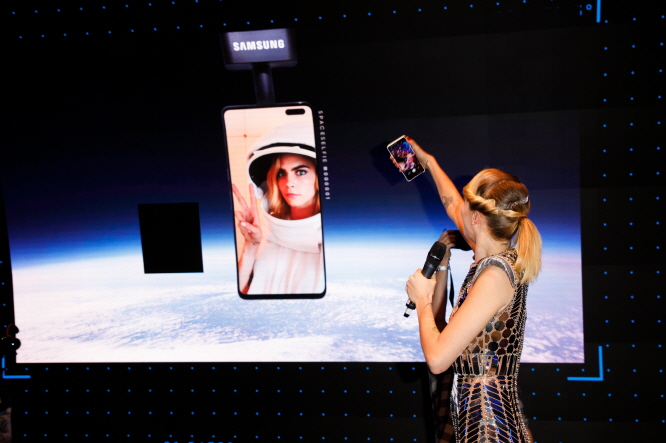 Cara Delevingne, an English actress and model, unveils her selfie taken indirectly from space during an event held at the Samsung KX experience store in London on Oct. 23, 2019. (image: Samsung Electronics Co.)

SEOUL, Oct. 24 (Korea Bizwire) — Samsung Electronics Co. said Thursday it has sent one of its Galaxy S10 5G smartphones into space inside a balloon to allow its users to take selfies with the Earth in the background.

The Korean smartphone maker has launched a balloon equipped with a specially designed rig to take the S10 up to 65,000 feet into the stratosphere to receive selfies transmitted from the Earth and send them back to the ground using a 5G network.

The first person to undertake the “SpaceSelfie” mission was Cara Delevingne, an English actress and model, who shared her photo on social media.

Consumers can get their own space selfie by uploading a photo to Samsung’s website by Oct. 31.

The Korean smartphone maker and network equipment provider said the project was launched to showcase the potential of its smartphone and mobile technology in extreme environmental conditions.