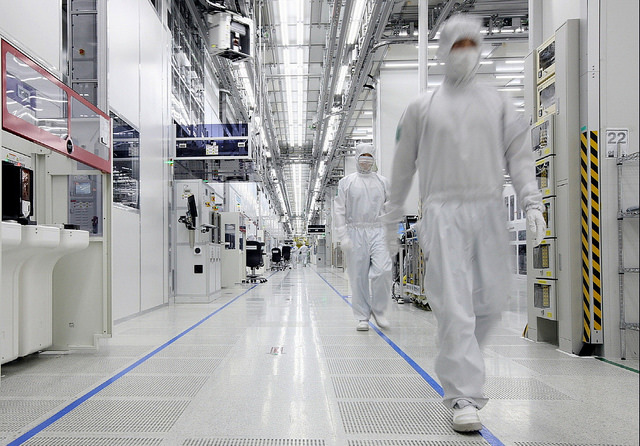 The DRAM industry expanded 8.2 percent on-year in the last quarter of 2014, and is forecast to grow at a steady pace of 13 percent this year. (image: Samsung Electronics)

SEOUL, Feb. 12 (Korea Bizwire) — The combined share of Samsung Electronics and SK hynix, South Korea’s chip giants, in the global DRAM market stood at over 70 percent for the first time in the fourth quarter of 2014, data showed Thursday.

Their portion together came to 70.4 percent as of the end of December, up from 69.7 percent the previous quarter, according to data compiled by market tracker DRAMeXchange.

The share for each company reached 41.4 percent and 27.7 percent, respectively, adding to a combined 69.1 percent by calculation. But because the global chip market is virtually dominated by the top few, smaller rivals with minor shares are excluded, raising the figures for the Korean companies, DRAMeXchange said.

U.S. Micron Technology Inc. and Nan Ya Plastics Corp. of Taiwan trailed behind Samsung Electronics and SK hynix in the chip market, with their shares standing at 24 percent and 3.1 percent, respectively.

The upbeat data for the Korean players came as they have been ahead of others with the advanced 20-nanometer technology, a finer processing that will lower product costs.

Samsung Electronics retained the top spot despite a slight fall in the share from the third quarter’s 41.7 percent.

The DRAM industry expanded 8.2 percent on-year in the last quarter of 2014, and is forecast to grow at a steady pace of 13 percent this year, according to DRAMeXchange.