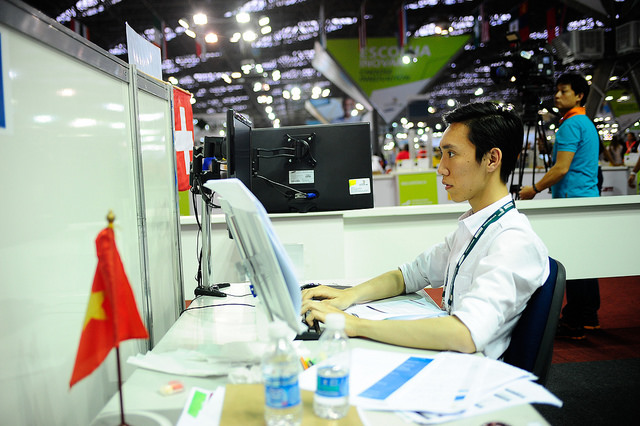 According to WorldSkills, organizer of the biennial skills competition, Thanh won the bronze medal in IT Software Solutions for Business at the recent world vocational contest held from August 11 to 16. The student from the Industrial University of Ho Chi Minh City earned 535 out of 600 points, and ranked third after Korea’s Yu Sang-hun.

However, behind his splendid achievement was Samsung Electronics. In an interview after his historic performance with local media, Thanh said, “With sponsorship from Samsung, I was able to receive training in Korea from June of last year to July this year.”

In March of last year, Samsung signed an MoU with the Directorate of Vocational Training under the Vietnamese Ministry of Labor to support the vocational contest. Since then, it has supported two Vietnamese competitors including Thanh by inviting them to Korea. It sponsored prior WorldSkills medalists to help train them.

Samsung is not only sponsoring Vietnamese delegates, but also other countries including Russia as one of the global premium partners of WorldSkills International. An official at Samsung said, “We are sponsoring the competition to reinforce the technical capabilities of different countries and work on co-development with local communities.”

At the recent competition, approximately 1,200 competitors from 59 countries challenged each other in some 50 categories. Vietnamese sent a delegation comprised of 14 candidates competing in 13 different skills.