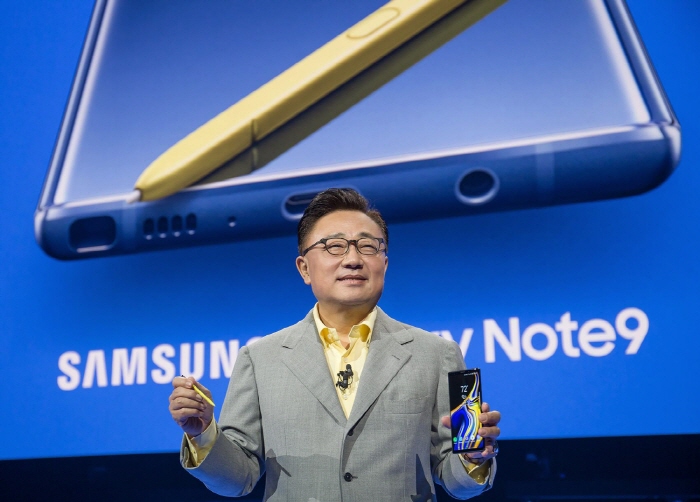 SEOUL, Aug. 10 (Korea Bizwire) — Samsung Electronics Co. unveiled Friday the Galaxy Note 9 phablet, which is equipped with a new stylus and the best battery and storage among all of its premium devices. The new product could help breathe new life into the company’s IT and mobile division.

The company held a showcase event in New York for the new smartphone, which features a 6.4-inch display, with the specs falling in line with most rumors that had circulated in the market.

The Galaxy Note 9 comes with a whopping 4,000mAh battery, which is significantly larger than the 3,300mAh of the predecessor Galaxy Note 8.

Samsung has in the past been cautious about expanding battery capacity after production of the ill-fated Galaxy Note 7 was suspended after its 3,500mAh batteries caught fire. The market’s rising demand for larger batteries to support various top-notch features seems to have spurred the company to move forward.

Due to the larger battery, the latest Note weighs 201 grams, compared with 195 grams for the 6.3-inch Note 8. The new phablet is 2mm thicker than its predecessor.

The new phablet distinguishes itself from the previous Note by having a version with a 512 GB memory. In conjunction with a microSD slot, the new model is capable of providing users with 1 TB of memory. The other edition comes with a modest 128 GB capacity.

Another noteworthy feature of the phablet is an improved pen powered by Bluetooth technology that provides users with a wider range of features.

People can click the pen to activate designated applications or use it to get the phone to shoot photos or videos. Samsung said the pen connects to various applications, including YouTube and Snapchat.

The tech giant said it will open the development kit for the S-pen to invite more applications to its ecosystem.

The newest Galaxy device, moreover, boasts what it calls “intelligent camera” which optimizes settings depending on objects. It automatically identifies 20 different categories, including flower, food, and sky.

The 12-megapixel lens supports “Super Slow-Motion,” like the Galaxy S9. The main camera adopts a variable aperture that can switch between F1.5 and F2.4. It also has an additional 12-megapixel lens for long-distance shots.

The phone is equipped with the 8-megapixel selfie camera.

Samsung said the Galaxy Note 9 will automatically tell users if a person’s eyes are closed or the photo is out of focus.

“An immediate notification will appear if the image is blurry, the subject blinked, there is a smudge on the lens, or there’s backlight impacting the quality of the image,” the company said.

In terms of speed, Samsung said the Galaxy Note 9 is equipped with a high-performance 10nm 64-bit Octa-core processor capable of download speeds of up to 1.2 Gbps.

The Galaxy Note 9 has an improved cooling system that allows users to enjoy high-quality gaming contents for extended periods without having devices overheat. Samsung said the Note series’ largest-ever 6.4-inch display with 18.5:9 ratio, along with “Dolby Atmos” sound system, mean it is optimized for gaming experiences.

The Galaxy Note will come equipped with Samsung’s latest artificial intelligence (AI) technology in the form of the Bixby 2.0, an updated version of the company’s voice-assistant program. The new iteration is capable of better understanding spoken commands from people.

Samsung said Bixby will continue to learn patterns of how the device is being used, providing customized information as time goes by.

The new phablet can connect to an external monitor with a HDMI adapter through the simplified Samsung DeX, or Desktop Extension.

The Galaxy Note 9 will be released in black, blue, purple, and copper. 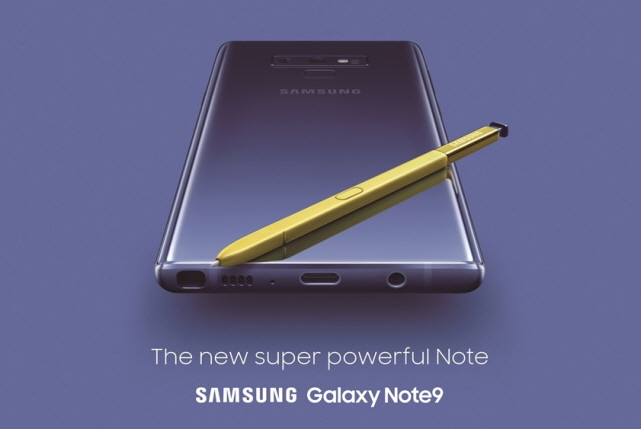 Samsung has opted to release the Galaxy Note 9 earlier in the year than its predecessor, with market watchers speculating the company is striving to revitalize its fortunes in the smartphone business, especially as American archrival Apple Inc. is getting ready to launch its own new phones next month.

Samsung has been facing hurdles as the Galaxy S9, which went on sale earlier this year, failed to grab customers’ attention as it lacked the kind of innovation that can get people to open their wallets. The flagship model has taken flak for not being price competitive compared with cheaper Chinese rivals.

Samsung Electronics said its IT and mobile division, which oversees the smartphone business, posted an operating profit of 2.67 trillion won (US$2.38 billion) in the second quarter, falling 34 percent from 4.06 trillion won tallied a year earlier.

The sales of the Note 9 will start in South Korea on Aug. 24, with preorders starting on Monday.

Samsung said the Galaxy Note 9 is also recognized as a “YouTube Signature Device” by the video-streaming service provider, due to its optimized specs that can be used to stream high-quality contents.

The South Korean company joined forces with the global music service provider Spotify to provide rich content to users of the Galaxy Note 9.

“The Note has always been our showcase for premium technology and industry-defining innovation, and Galaxy Note 9 is no exception. It’s designed for a level of performance, power and intelligence that today’s power users want and need,” said Koh Dong-jin, who heads Samsung’s mobile division.

“Note fans are Samsung’s most loyal; we know they want it all, to get the most out of work and play, and Galaxy Note 9 is the only phone that can keep up with their busy lives,” he added.