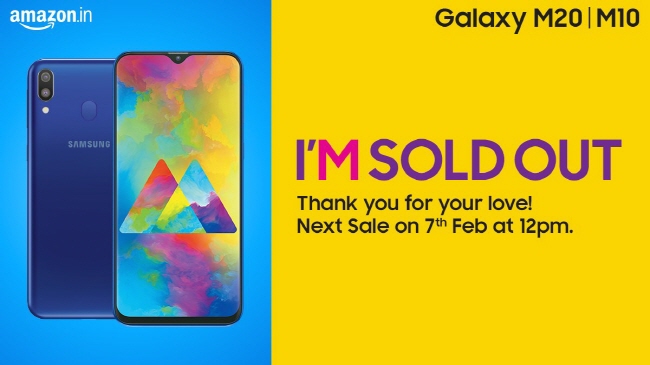 Samsung said the device borrows from the aesthetics of its J-series of phones although it comes with various updates. (image: Samsung Electronics Co.)

The South Korean company, citing the retailer, said the standard M10 and larger M20 phone sales in the first day were unprecedented, and showed the potential to attract customers away from products being made by Chinese manufacturers.

Samsung built the M range of smartphones to retake its leading position in the subcontinent after it was overtaken by Chinese rival Xiaomi Tech last year.

The latest device has a small notch at the top of the near bezel-free screen. The M20 model packs an eight mega pixel selfie camera along with dual 13 and 5 mega-pixel shooters on the back. It has a 5,000 mAh battery and comes equipped with a face recognition and fingerprint sensor.

The world’s largest smartphone producer said the device borrows from the aesthetics of its J-series of phones although it comes with various updates.

The phones, to offer the best possible value, are only sold on Amazon India and the official website of the company’s local office.

According to market monitor Counterpoint Research, Xiaomi controls 28 percent of the Indian market, with Samsung trailing at 24 percent.

The company said it will again sell the M10 and M20 in India on Thursday with the device to reach Indonesia this month, followed by the United Arab Emirates and Russia going forward.

Samsung has yet to decide if the smartphone will be sold in South Korea.