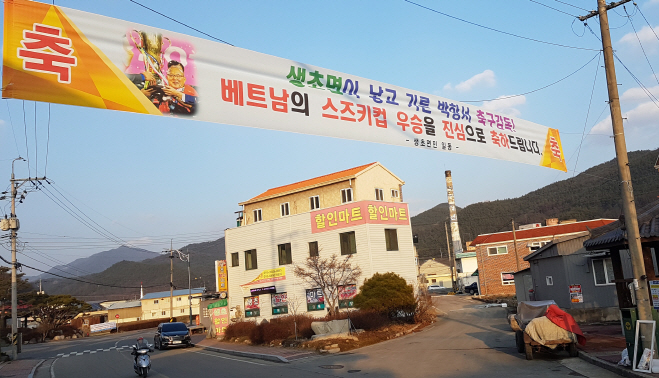 A banner hung over a Sancheong County street on Dec. 17, 2018, to celebrate the Vietnamese national football team’s victory at the Suzuki Cup. (Yonhap)

Sancheong is the hometown of Park, who has become a national hero in Vietnam as well as in South Korea after his amazing successes as the head coach of the Vietnamese national and under-23 men’s football teams since October 2017.

His previous feats include a run to the semifinals at the 2018 Asian Games and the 2018 Suzuki Cup title.

“Sancheong villagers have decided to hang six banners congratulating Park and his team’s victory at the Southeast Asian Games football finals across the county,” a county official said.

The county did so when Park was chosen as the Coach of the Year by the ASEAN Football Federation last month.

“The news of Park and his team’s victory is also a great joy and glory to us,” the official said, adding that he believes Sancheong and Vietnam have now formed a brotherhood relationship.

Owing to Park’s explosive popularity, Sancheong has also become a famous destination for Vietnamese tourists. Park was appointed as an honorary ambassador of Sancheong County during a visit to his hometown early this year.

Last month, the county mapped out a basic plan to create a Vietnam-style village in the Saengcho-myeon district where Park was born.

More than 20 Vietnamese tourist groups visited Sancheong from April to November this year.