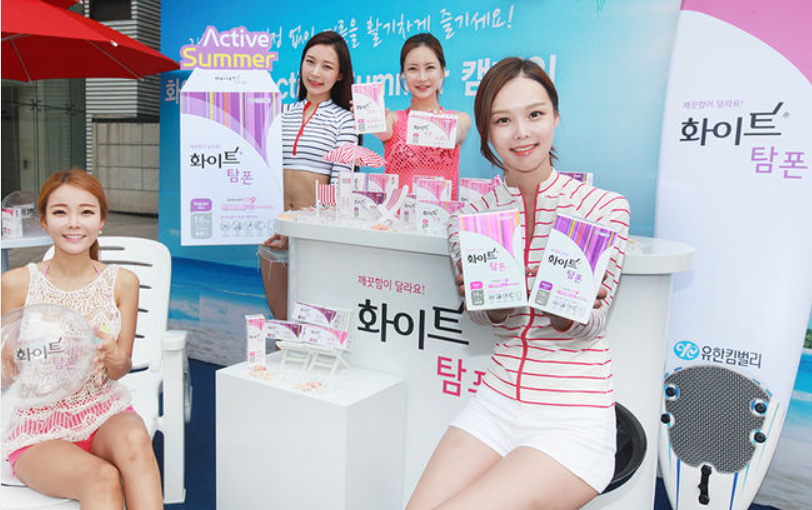 These real stories, posted on internet community sites, have provided a clear picture of the reality of poverty welfare policies and the deepening gap between the wealthy and the poor.

The stories of low-income teenagers have been shocking, leaving readers appalled. A student who had skipped school for a whole week was found at home simply lying down on top of a towel because she could not afford sanitary pads.

Another student, knowing her parents did not have the money, had no choice but to use a shoe insole instead of asking them to buy sanitary pads for her. Several teenagers also reported that they rolled up toilet paper from their school’s bathroom and substituted it for sanitary pads.

An organization estimated that there are about 60,000 low-income teenagers (between the ages of 15 and 19) who cannot afford sanitary pads, and that many of them live with their grandparents or single parents instead of ordinary nuclear families.

As menstruation is a sensitive issue, teenagers find it difficult to talk to others about what they have to face. This increases the likelihood that there are many teenagers who continue to live with the issue hidden from the awareness of others.

As the ‘Sanitary Pad Controversy’ garners more attention, many are wondering whether corporations that originally intended to raise sanitary pad prices will continue with the planned increases. For instance, the Korea National Council of Consumer Organizations has already asked Yuhan-Kimberly to cancel the planned  price increases.

Crowdfunding campaigns in which donors from the general public fund sanitary pad purchases for needy teenagers have also been set in motion. With the recent stories surfacing online, the support of social institutions is another possibility generating attention. 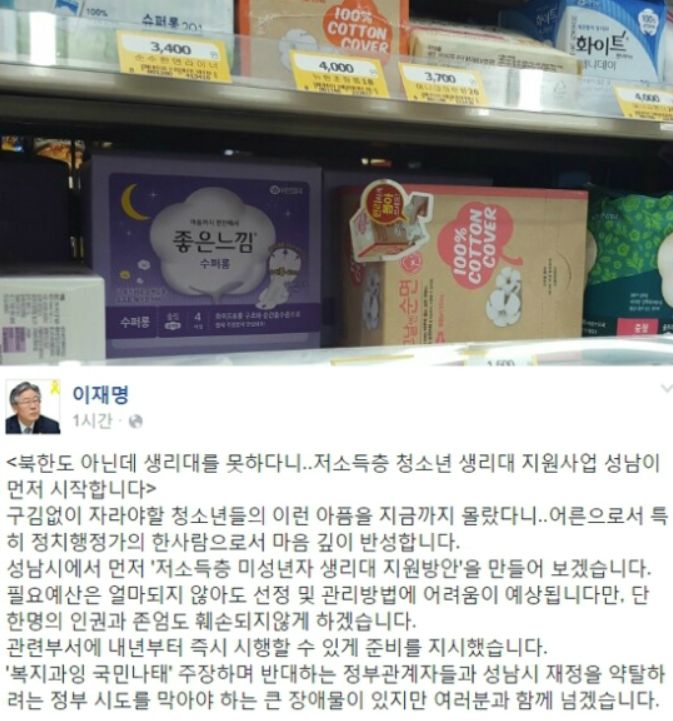 Social venture company ‘Ease and More’, for example, established an agreement with the ‘Love for Single Parents’ organization, and has been providing sanitary pads to low-income girls since last month.

Mayor Lee Jae-myeong of Seongnam, famous for his progressive welfare policies, revealed that he plans to begin a sanitary pad support program for low-income teenagers.

“Seongnam will be the first to create a ‘Sanitary Pad Support Plan for Low-Income Adolescents’,” said Mayor Lee in a Facebook post on May 30.

“The plan will not cost much, but I do foresee difficulties during the selection and management methods. Nevertheless, we will make sure not a single person’s human rights and dignity will be offended,” he promised. Mayor Lee added that he instructed the relevant department to begin the plan immediately starting next year.

In early January, Mayor Lee caused a stir when he announced that Seongnam would independently implement a three-part welfare program that provides monetary support for young adults, free uniforms for students, and postpartum support.

Under this policy, young adults 24 years of age or older who have been Seongnam residents for more than three years receive 500,000 won per year; new middle school students receive 150,000 won towards school uniforms; and new mothers receive 250,000 won in financial support.

At the time, the benefits were double these listed amounts, but program funding decreased due to opposition from the central government.

On a different note, some individuals stated that if low-income teens had to experience humiliation for the lack of access to sanitary pads, it is an issue of human rights rather than social welfare.

They pointed out that in a Korean society that aims to become an advanced, high-tech digital country of the 21st century, the reality of some teens not being able to afford the most basic daily product is emblematic of  the country’s societal regression.