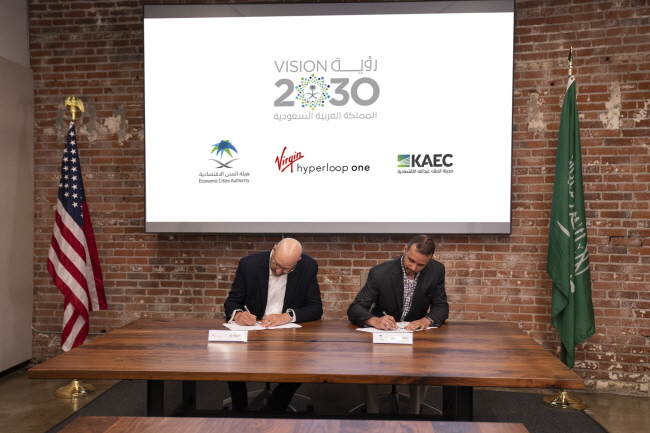 LOS ANGELES, Jul. 22 (Korea Bizwire) — Virgin Hyperloop One, the only hyperloop company in the world to successfully test its hyperloop technology at scale, today announced a development partnership with the Saudi Arabia’s Economic City Authority (ECA) to conduct a study to build the world’s longest test and certification hyperloop track, as well as a research and development center and hyperloop manufacturing facility north of Jeddah.

Today’s announcement took place this week at Virgin Hyperloop One’s Los Angeles headquarters during a visit from a senior delegation of Saudia Arabia’s Economic City Authority, led by Secretary-General Mohanud A. Helal. The study will focus on King Abdullah Economic City (KAEC), located 100 kilometers north of the Red Sea port of Jeddah. The project, which would include a 35-kilometer test and certification track, will create opportunities for the development of specific hyperloop technologies and develop local expertise in Saudi Arabia which be commercialized and scaled. The study will also facilitate the development of localized hyperloop supply chains and the acceleration of innovation clusters across the Kingdom.

“Our partnership with Virgin Hyperloop One is a matter of pride for us and all of Saudi Arabia,” said Secretary General Mohanud A. Helal. “As we continue to help deliver the strategic pillars of Vision 2030, technology transfer and high-tech job creation opportunities that this relationship will bring are fundamental to our progress as a nation and our efforts to create opportunities for our bright young people. Having hyperloop at King Abdullah Economic City is going to act as a catalyst for a Saudi Silicon Valley effect and galvanize our software development, high technology research, and manufacturing industries,” he added.

In parallel to the implementation of the Study, Prince Mohammad bin Salman College of Business and Entrepreneurship will collaborate on the creation and publication of an academic paper outlining the economic impact of a Hyperloop Center of Excellence in KAEC. Additionally, experts from King Abdullah University of Science and Technology (KAUST) will visit the Virgin Hyperloop One testing facility in Nevada to conduct a technical review, followed by the publication of an academic paper.

“With Vision 2030, the Kingdom has demonstrated bold leadership to advance game-changing solutions. A hyperloop system could help enable Saudi Arabia to become a global transportation powerhouse, nurture the nation’s innovation and entrepreneurial culture, and grow an innovative knowledge workforce,” said Jay Walder, CEO, Virgin Hyperloop One. “I look forward to this collaboration with our visionary partners in the Kingdom of Saudi Arabia to turn this technology into a mass transportation solution.”

Virgin Hyperloop One’s technology features depressurized tubes that carry on-demand passenger or cargo “pods” at speeds up to 1080 kilometers per hour. With speeds three times faster than high-speed rail and an on-demand, direct to destination experience, hyperloop technology can reduce journey times across Saudi Arabia, exponentially increasing connectivity across not only across the country but throughout the Gulf Corporation Council (GCC), which includes the countries of Saudi Arabia, Kuwait, the United Arab Emirates, Qatar, Bahrain, and Oman. Traveling from Riyadh to Jeddah would take 76 minutes (currently over 10 hours) utilizing the land bridge for both passenger and freight movement, positioning Saudi Arabia as the gateway to three continents. Traveling from Riyadh to Abu Dhabi would take 48 minutes (currently over 8.5 hours).

About Virgin Hyperloop One
Virgin Hyperloop One is the only company in the world that has successfully tested its hyperloop technology at scale, launching the first new mode of mass transportation in over 100 years. The company successfully operated a full-scale hyperloop vehicle using electric propulsion and electromagnetic levitation under near-vacuum conditions, realizing a fundamentally new form of transportation that is faster, safer, cheaper, and more sustainable than existing modes. The company is now working with governments, partners, and investors around the world to make hyperloop a reality in years, not decades. They currently have projects underway in Missouri, Texas, Colorado, the Midwest, India, KSA, and the UAE. Learn more about Virgin Hyperloop One’s technology, vision, and ongoing projects here.

A photo accompanying this announcement is available at https://www.globenewswire.com/NewsRoom/AttachmentNg/e746dc58-3cc2-486d-a975-717b1bce0068