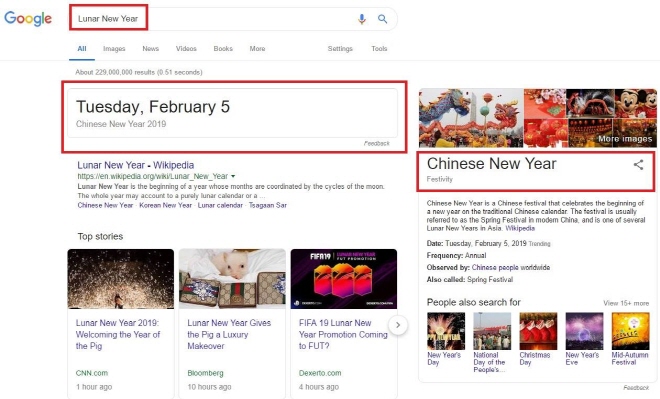 Searching for the term ‘Lunar New Year’ on Google came back with an explanation for the Chinese New Year listed as the top hit as well as on the Knowledge Graph. (image: Yonhap)

SEOUL, Feb. 7 (Korea Bizwire) — The Voluntary Agency Network of Korea (VANK) has launched a campaign against foreign portal websites, broadcasting companies, and governmental organizations using the term Chinese New Year, in a bid to replace it with the correct expression of Lunar New Year.

According to the agency, searching for the term ‘Lunar New Year’ on Google came back with an explanation for the Chinese New Year listed as the top hit as well as on the Knowledge Graph.

There was hardly any information or photos related to the customs of the Korean New Year’s day. Most of the search results were related to the Chinese New Year.

Google’s Knowledge Graph automatically compiles the information related to the search to provide a one-page summary to the user at the top of the screen.

“Google’s method of delivering information has others around the world believing that the Lunar New Year is a Chinese New Year,” said Park Ki-tae, head of VANK.

“This undermines the diversity of so many ethnic groups in Asia, including us.”

Tteokguk (Korean rice cake soup), yut nori (a Korean board game) and saebae (New Year’s bow) are some of the many traditions unique to Korean New Year’s day.

Seeing this as being part of a ‘Chinese New Year’ could negatively affect the identities of young Koreans living abroad, says the agency.

VANK plans to send out petitions and the list of past cases to Google, foreign broadcasting companies, and governmental organizations using the term Chinese New Year.

“We decided to change the official title of the festival after we received complaints from other Asian ethnic groups who argued that the term ‘Chinese New Year’ fails to encompass the diversity of the Asian customs and tradition of the New Year,” said a Sydney city official.