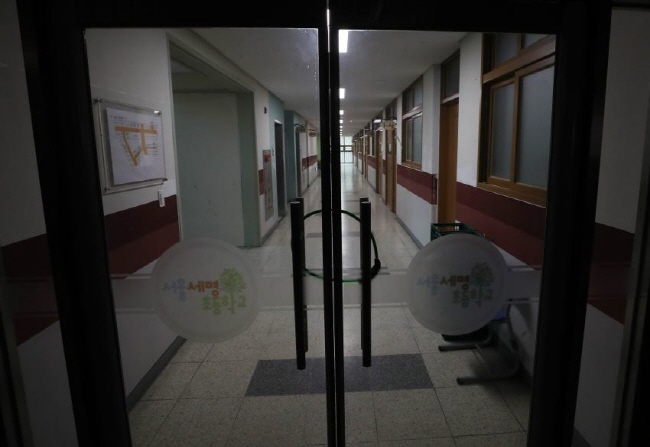 An entrance door is locked at Semyung Elementary School in southern Seoul on March 2, 2020. (Yonhap)

SEOUL, March 2 (Korea Bizwire) — The government Monday instructed all kindergartens and elementary and secondary schools nationwide to again postpone the start of the spring semester, by two weeks, to protect students from the coronavirus outbreak as the number of underage patients has topped 200.

Minister of Education Yoo Eun-hae announced the second postponement of the start of the new school year in two weeks, as the nation reported 599 additional cases of COVID-19 during the day, bringing the total to 4,335, including 201 minors.

Under the unprecedented instruction, all kindergartens and elementary, middle and high schools across the country will begin their new school year on March 23, three weeks later than initially planned.

The education ministry announced a one-week delay of the start date of the spring semester on Feb. 23, when the government raised its coronavirus alert to the highest level.

“The government has concluded that safe operations of schools will be difficult due to the surge in underage patients,” Yoo said in a news conference.

According to government data, the number of underage patients surged by 37 persons in less than one day to reach 201 as of 10 a.m. Monday. That figure includes 169 persons aged between 10 and 19.

The rapid spread of the virus has raised fears of local infections at schools, prompting students and parents to ask for an additional rescheduling of the school calendar.

“The next two weeks are critical to curbing the growth of the coronavirus infections. Even after a downturn, one more week is needed to ensure a safe environment for students,” Yoo said.

After March 23, the new semester’s beginning date will be adjusted depending on the circumstances of each region, the minister said.

The ministry explained that the period of summer and winter vacations will be adjusted to make up for the three-week reduction in school days caused by the postponements.

In Daegu, the southeastern metropolis hardest hit by the coronavirus, its educational authorities last week announced a two-week postponement of the start of the spring semester at kindergartens and elementary and secondary schools to March 23.

The education ministry also said it will ask private educational institutes nationwide to suspend operations for the time being to help minimize contacts among young students.

The ministry said it will lead students to engage in home schooling over the next three weeks by offering digital textbooks and free online educational content to them.

It will also push for the opening of online classes featuring feedback and group messaging programs.

Kindergartens and elementary schools will run emergency child care services for parents facing difficulties due to the changed school calendar.

As the emergency child care services are unpopular with many parents due to their short hours and fears of virus infections among students, the ministry said it will ensure the child care services run from 9 a.m. to 5 p.m. and push to extend the maximum yearly period of paid child care leave for salaried workers from the current 10 days to 15 days.