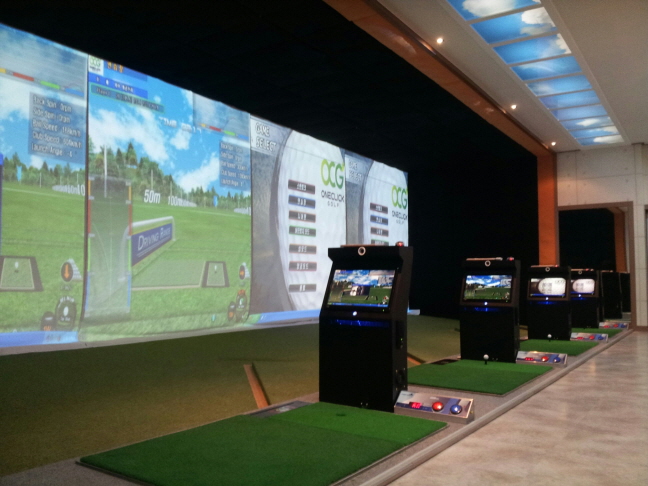 South Korea, which is currently the third-largest golf market in the world behind the United States and Japan, has witnessed a surge in the number of screen golfers over the years. (image: Golf Total Solution)

SEOUL, Jan. 25 (Korea Bizwire) — Thirty-year-old fund manager Park Jong-il, who works in the financial district of Yeouido in western Seoul, tees off at his favorite golf course located on the southern resort island of Jeju at least once a week after work.

Instead of booking the one-hour flight and possibly reserving a hotel room, he can enjoy the course while still in his everyday attire, minus the necktie, by walking just five minutes from his workplace.

The course is indoors so it can be enjoyed all year round and is equipped with a virtual reality (VR) game commonly referred to as “screen golf.”

Park did not have a membership at a country club, let alone his own golf clubs, when he had his first 18-hole experience at the simulator bay operated by the country’s leading screen golf company Golfzon, rather than at an actual grass golf course.

“I always just assumed golf was a sport for a small number of privileged men in their 40s and 50s,” Park said, adding that screen golf lowered the hurdle for him and eventually motivated him to invest in lessons and equipment, such as a set of 14 golf clubs and Titleist bag.

Years ago, golf was viewed as a game for the rich and powerful as it invariably required memberships at country clubs worth hundreds of millions of won.

Since the first introduction of screen golf in the early 2000s, people who were curious about golf but could not hope to hit the course themselves flocked to play the virtual version of the game.

South Korea, which is currently the third-largest golf market in the world behind the United States and Japan, has witnessed a surge in the number of screen golfers over the years. 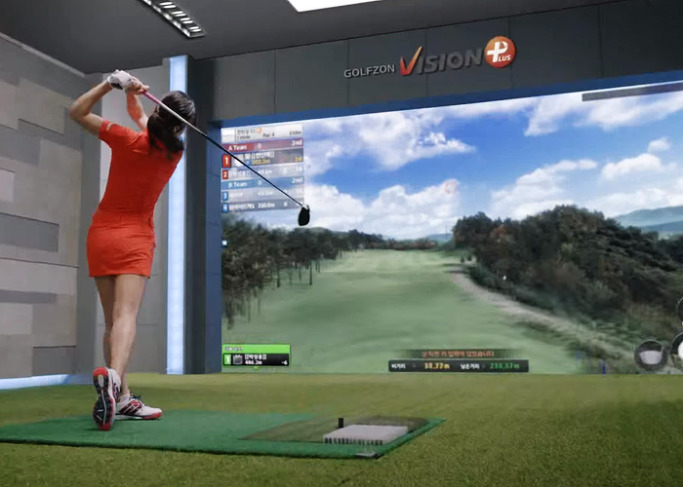 Golfzon simulator rooms can be found easily in most neighborhoods in Seoul, offering a VR 18-hole course for an average of just 25,000 won (US$23) per person, which is inclusive of rental fees for clubs, shoes, gloves and even golf wear.

The indoor room is equipped with a screen showing projections of VR fairways at the front as players tee off on a terraced tee box that can even tilt to match the slope shown on the screen as golf balls come up automatically from a hole on the mat.

The system can simulate almost all aspects of an actual golf course and even analyze a player’s swing using a high-speed camera to provide a detailed analysis of the entire flight of the ball.

Golfzon ranks scores not only alongside fellow players but also with millions of other golfers across the country through a system that can be easily viewed through mobile applications.

“I feel like I am playing with other millions of other golfers,” Park said, adding that he can compare scores and tactics with people who are playing the same course.

Golfzon offers hundreds of courses from all across the country and even so-called master courses that only exist on the VR system for players wishing for something extra.

“We created about 10 imaginary courses that are considered extremely difficult, even for professional players, for serious screen golfers,” said a Golfzon software engineer who asked to be identified by only his surname Hyun.

For those who get tired of golfing into a projection screen in a small room, there are also outdoor practice ranges with VR systems installed so that players can enjoy simulated games and at the same time look at the full flight of the ball.

These ranges are mostly located on the outskirts of Seoul, with an average price of between 25,000 and 30,000 won per person. 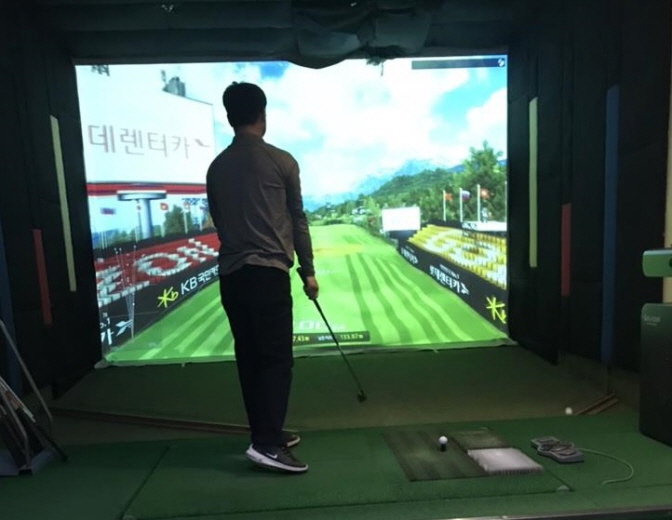 An indoor screen golf facility located in the financial district of Yeouido in western Seoul. (Yonhap)

Indoor screen golf rooms in the office districts of Gwanghwamun and Yeouido recently began providing a 9-hole course with a lunch set at a price of 17,000 won so that office workers can enjoy the course and dine in the room in about one hour.

Not only amateur players whose scores remain in the top 1 percent but professional KPGA and KLPGA players participate in the final round of the tournament, with a prize of 30 million won up for grabs.

Sim Seo-joon, more commonly known by his nickname “Simzzang,” is a professional golfer with a teaching license and also a YouTuber with more than 100,000 subscribers who provides tips for screen golf, such as how to calculate wind direction and distance to the green.

His YouTube channel has become hugely popular, allowing him to open screen golf-based practice places across Seoul and start his own TV shows that broadcast his matches with winning GTour and WGTour players.

Golfzon said the number of new golfers over the past one or two years surged by 34 percent, contributing to the overall number of golfers. The company also said 85.5 percent of newbies with less than two years of experience are using screen golf bays.

One golf instructor surnamed Won noted that a growing number of people who come for first-hand lessons are actually interest mainly in becoming good screen golfers and not necessarily masters on actual grass courses.

“Screen golf is not an alternative to real golf but a new kind of golf,” Won said.