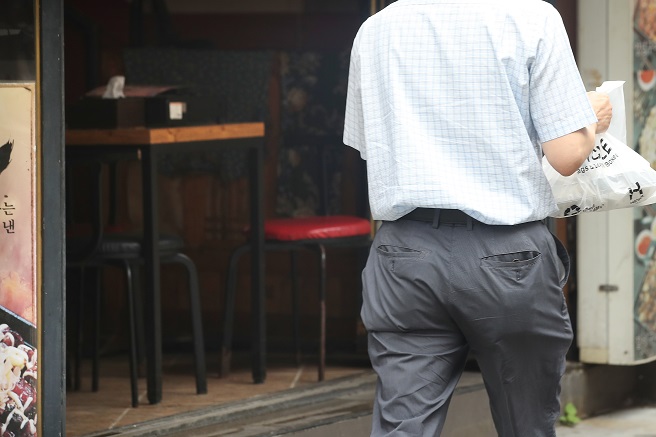 This July 19, 2021, file photo shows a man walking past an empty restaurant in central Seoul, where the strictest Level 4 social distancing rules have been imposed amid the unrelenting COVID-19 pandemic. (Yonhap)

About 3,000 members of an emergency committee of the self-employed and other online communities are expected to participate in the rallies scheduled to be held in nine regions nationwide Wednesday night, according to the group.

“Drive-through protests are a moderate way of expressing our opinion while not violating the Infectious Disease Control Prevention Act and the Assembly and Demonstration Act,” the association said.

It will be the third time for the committee to stage car protests. Hundreds of vehicles participated in protest parades in Seoul in July and in the southeastern city of Busan and neighboring South Gyeongsang Province in August.

Many businesses from restaurants and cafes to gyms and karaoke establishments have been subject to strict restrictions for months under the government’s social distancing scheme to fight the pandemic.

The greater Seoul area has been under the strictest Level 4 rules since July 12, with private gatherings of three or more people banned after 6 p.m.

The government decided Friday to extend the scheme for one month but eased curfews for restaurants, cafes and bars, allowing them to operate until 10 p.m., an hour later than the current 9 p.m., starting Monday.

It also decided to allow gatherings of up to six in the capital area, though they should include at least two vaccinated people during the daytime and four after 6 p.m.

“Shortening curfews by one hour may feel like teasing to small business owners,” Kim Ju-ho, an official at the People’s Solidarity for Participatory Democracy, said.

Merchants’ complaints will grow if the government keeps forcing them to make sacrifices, Kim added.

“I think the government restricted small businesses more easily because we did not have an organized power,” an official at the self-employed people’s committee said.