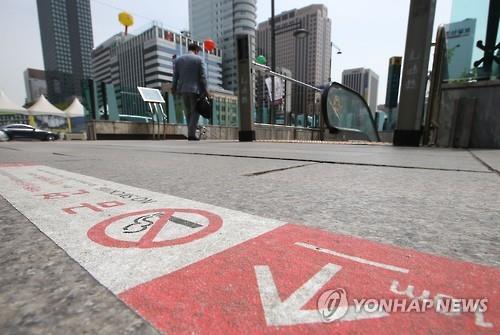 The regulation forbids smoking within 10 meters of all subways exits in Seoul. (image: Yonhap)

The regulation forbids smoking within 10 meters of all subways exits in Seoul. Violators will be fined 100,000 won (US$87.68) starting in September after a grace period of four months.

Seoul City Hall has placed 8,000 red signs throughout the city to mark these new nonsmoking zones. These signs will be attached to walls and stairs, as well as to the borders of the 10-meter zones, according to city officials.

The municipality expects the new policy to further reduce the number of complaints from citizens regarding health risks incurred by inhaling cigarette smoke in crowded public places.

Seoul plans to proceed with additional measures to raise public awareness about the new anti-smoking policy.

The central and local governments of South Korea have implemented a series of tough policies aimed at cutting down the nation’s smoking rate and health problems from smoking.