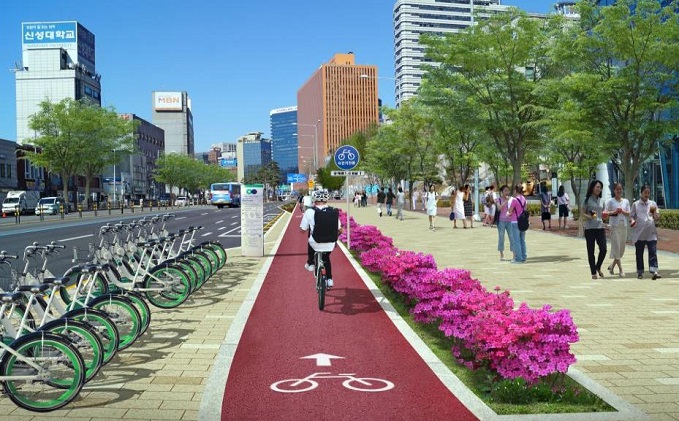 An artist’s impression of a bicycle lane near the Hangang Bridge provided by the Seoul city government.

SEOUL, June 15 (Korea Bizwire) — Seoul City plans to build a total of 23.3 kilometers of new bicycle lanes by the first half of next year, the metropolitan government announced Monday.

The new roads will be connected to existing ones as part of the city’s plan to construct a crisscross network of bike paths to cut congestion, fight pollution and reduce energy use.

A two-meter-wide bicycle lane will be paved by the first half of 2021 on the 4.2-km Hangang expressway, which connects Seoul Station and the Hangang Bridge.

A 11.88-km bicycle lane will be built over or below the Cheonggyecheon road, which stretches along Cheonggye Stream in the city center, by the end of this year.

It will be connected to existing bike roads running along major streams in other parts of the capital.

A total of 7.2 km of bike roads will be built on six bridges over the Han River.

In addition, the city will push for the installation of bike racks in subway trains, on the back of buses and on top of taxis.

It also plans to provide benefits to owners of corporate buildings that install bicycle stands and shower rooms for bicycle commuters.

The city aims to build an extensive bike road network by 2030 to allow citizens to ride the two-wheeled vehicles anywhere and to reach any place by bicycle in one hour.