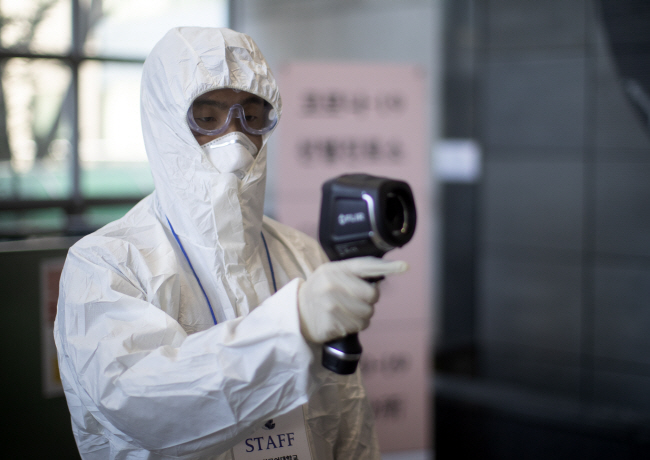 A school official uses a thermal camera at a dormitory at Hankuk University of Foreign Studies in Seoul on Feb. 18, 2020. (Yonhap)

SEOUL, Feb. 21 (Korea Bizwire) — The Seoul city government and universities in the capital on Friday announced a set of measures aimed at helping Chinese students enrolled in local schools as the coronavirus outbreak shows no sign of abating.

The measures include providing shuttle bus services from the airport to schools for students who are returning for the new school year after spending their winter vacation in their home country, according to the Seoul Metropolitan Government and Seoul-based universities.

The city government and district offices will also provide temporary accommodations for students as some universities may not have enough space at their dormitories to quarantine all students coming from China.

Meals, daily necessities and regular room disinfection will be provided to quarantined students, they added.

As part of precautionary measures, the city government and schools plan to monitor students’ health twice a day and run a mobile app where students will be able to report their health conditions.

“The city will cooperate closely with the education ministry, universities and district offices to prevent the contagious virus from further spreading and help ease concerns for local residents,” Seoul Mayor Park Won-soon said.

Some 38,330 Chinese students are enrolled in 68 universities in the city, according to the latest data. Around 17,000 of them are expected to arrive here for the new school year that starts in March.

The education ministry has advised local universities to postpone the start of the new school year by up to four weeks.

In a press briefing held Friday, the ministry, however, said it does not yet plan to expand the advisement to postpone to kindergartens, elementary, middle and high schools.

The southeastern city of Daegu, which has seen a sharp surge in infections, has taken the exceptional step of postponing the first day of school by a week to March 9.

Many of the infections are in Daegu and the surrounding North Gyeongsang Province, with the number of confirmed cases there reaching 153.