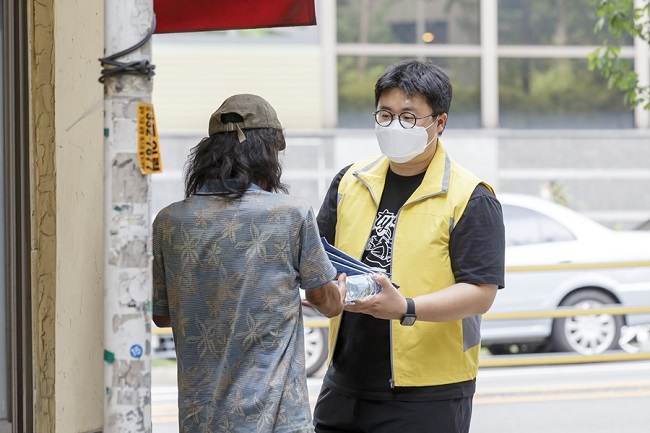 An official at the Mapo District of Seoul gives out water bottles and face masks to a homeless person on July 21, 2021 in this photo provided by the district office.

The Mapo District Office plans to provide 30 million won (US$26,100) worth of cooling devices such as electric fans to 716 households, including single elderly households, single middle age households in near poverty and single parent households.

On the days when a heatwave alert is issued, the district office will dispatch a group of elderly care supporters to the single elderly households and the households with severely disabled persons on a regular basis to check their safety.

The Gangdong District Office teamed up with three companies within the district including Samsung C&T Corp. to promote a program in which volunteers deliver simple cooked meals and air purifiers to vulnerable elderly people and community childcare centers.

Samoo Architects & Engineers, a company within the district, plans to run a special program next month.

By inviting 20 children from the community childcare center, it will provide them with the opportunity to experiencing the architecture design process in a virtual reality environment.

The Geumcheon District Office will disclose pre-recorded teenage band and dance performances through its YouTube channel.