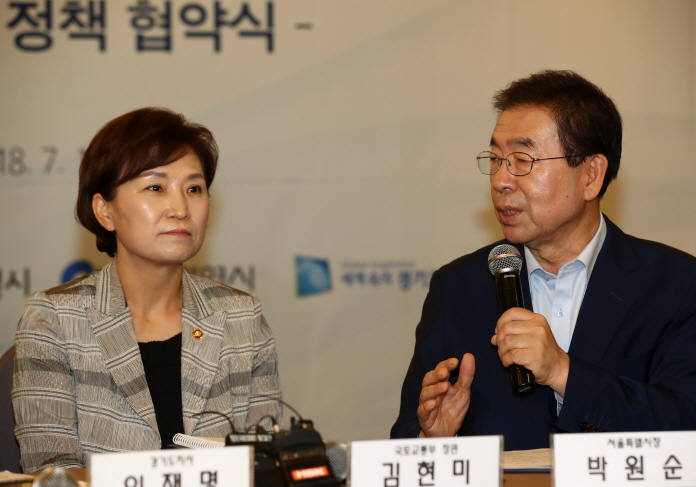 SEOUL, Sept. 21 (Korea Bizwire) — The Ministry of Land, Infrastructure and Transport (MOLIT) is said to be at odds with the Seoul Metropolitan Government (SMG) regarding the former’s plan to “provide housing to bring stability to home prices in the Seoul metropolitan area,” expected to be announced tomorrow.

With the SMG currently refusing to lift the restrictions, the central government’s plan to bring stability to home prices by providing additional housing is expected to be face a setback.

The ministry’s worry will deepen, experts say, since Seoul officials have proposed to provide 62,000 new homes by utilizing the city’s unused land and by increasing the floor area ratio instead of addressing the green belt issue.

Park Won-soon, the current mayor of Seoul, is adamant about not lifting the regulations that currently pertain to the green areas of the city.

As of present, the ministry has not released a public statement regarding the issue.

The number of homes proposed by the city of Seoul far exceeds the 50,000 homes that the ministry had initially planned to supply within the nation’s capital.

Seoul has highlighted 20 areas in Seoul including the site of a former detention center in Garak-dong in Songpa-gu and a train maintenance center in Yongsan.

The areas are spread out all over the city, and as most of the spots do not encompass a single wide area, critics say that the areas are not large enough to have the outstanding effect that the ministry is aiming for.

In response to Seoul’s proposal, the ministry stated that the issue is “still under negotiation” as Seoul’s plan does not seem attractive in the short run.

Another factor that the ministry must consider is the backlash it may receive if it decides to forcibly lift greenbelt regulations despite an SMG proposal that appears to be a viable solution.

Considering such factors, experts predict that tomorrow’s announcement regarding the housing plan will exclude green belt areas as possible sites to be considered as part of the proposed housing project.