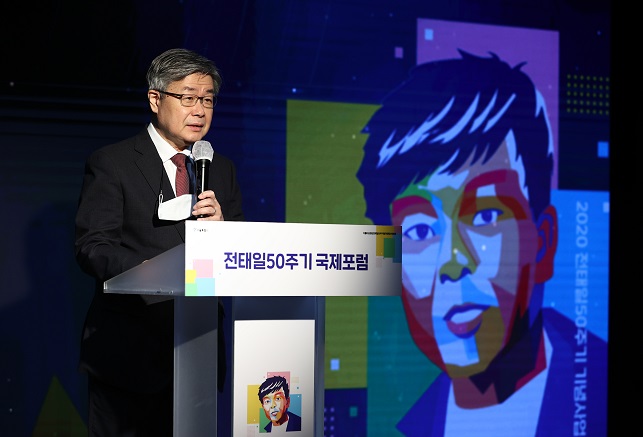 Minister of Employment and Labor Lee Jae-gap speaks at an international forum held in Seoul on Nov. 11, 2020, on the occasion of the 50th death anniversary of an iconic Korean labor rights activist. (Yonhap)

SEOUL, Nov. 12 (Korea Bizwire) — In memory of an iconic labor rights activist who burned himself to death 50 years ago in the heart of Seoul to fight for better working conditions, an international academic forum is under way here this week for discussions on the future of the labor movement, the metropolitan government said Thursday.

The forum, which kicked off at Seoul City Hall and other locations on Tuesday for a three-day run, has been organized as part of efforts to reflect on the legacy of the late Chun Tae-il, a garment worker who sacrificed himself in 1970 at age of 22 to protest horrific working conditions, it said.

Marking Chun’s 50th death anniversary this year, the forum is being held under the theme of “50 years after Chun Tae-il, the future of labor to think together.”

On Nov. 13, 1970, Chun, with his body doused with petrol, chanted slogans calling for workers’ rights and a decent working environment, running across a marketplace in central Seoul.

His death served as a catalyst for public debate on the substandard labor conditions and the brisk labor movement in the country. 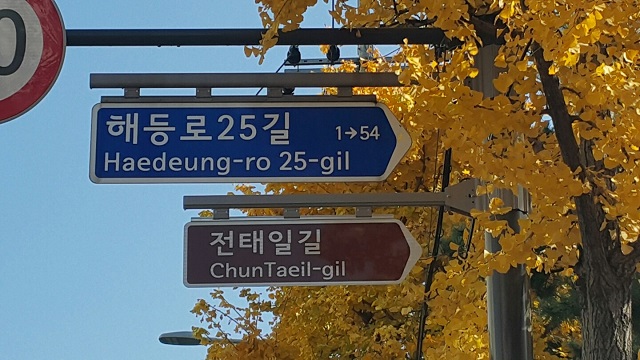 This photo, provided by the office of Seoul’s Dobong Ward, shows a road sign for “ChunTaeil-gil,” an honorary road named after an iconic South Korean labor activist, in northern Seoul.

According to the Seoul city government, Prof. Saskia Sassen at Columbia University, one of the top sociologists worldwide, will give a speech on the topic of “when the globalized world disintegrates into small regions,” on Thursday, the third and last day of the forum.

Kim Keum-soo, honorary chairman of the Korea Labor and Society Institute, also plans to lecture on the future of labor activism in South Korea, while Edward Webster, a sociology professor at the University of the Witwatersrand in South Africa, is to talk about the possibility of creating a humanized and civilized global supply chain.

All sessions will be live-streamed at the forum’s official YouTube channel, “Chun Taeil TV.”

On Tuesday, the forum focused on the plights of female workers hit by the new coronavirus, while discussions were held on the future of labor movement on Wednesday.

The office of Seoul’s northern Dobong Ward said it will name a street near Chun’s old house in its district “ChunTaeil-gil” on Friday to commemorate his 50th death anniversary. The street will have his name for five years, it added.