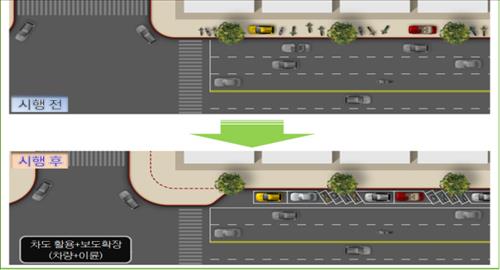 Due to this inconvenience, the district police and the city government came to an agreement on the establishment of a pocket parking lot. (image: Seoul City Government)

SEOUL, April 6 (Korea Bizwire) — Seoul city is set to develop ‘pocket parking lots,’ parking lots established in the lane nearest to the sidewalks, in 14 districts in order to resolve problems of illegal parking in crowded areas, said city officials on April 5. The government will first establish a pocket parking lot in front of Dongdaemun Composite Market, and is planning to complete the installation in May.

Sidewalks and lanes around Dongdaemun Market are especially busy with illegally parked motorcycles. Although some motorcycles are parked in fenced off areas and monitored by police, the areas are limited in space and require the police to be continuously present in order to be effective.

Due to this inconvenience, the district police and the city government came to an agreement on the establishment of a pocket parking lot. The construction will be undertaken at night.