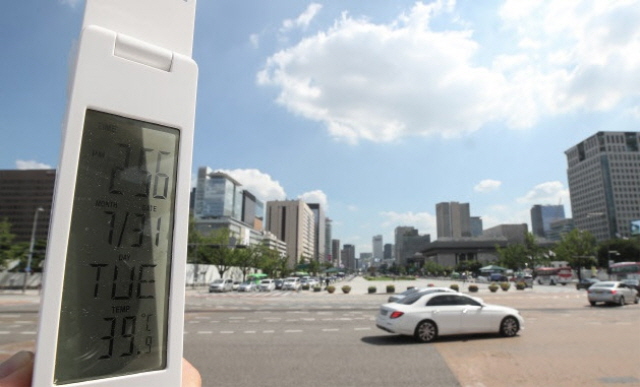 This photo filed July 31, 2018 shows a thermometer displaying a mercury of 39 degrees Celcius in front of central Gwanghwamun in Seoul in the afternoon.

It marks the second highest temperature after the country recorded 38.4 degrees Celsius on July 24, 1994, since the government began to compile the data in 1907.

Weather authorities said the temperature might break the record again over the next couple of days as the mercury is expected to rise further.

Seoul could reach an all-time high of 39 degrees Celsius, it said.

Across the country, the mercury in Hongcheon and Yeongwol, counties in Gangwon Province on the eastern coast, recorded the highest of 38.5 degrees Celsius.

A county in North Gyeongsang Province recorded 38 degrees, followed by 37.5 degrees in Suwon, just east of Seoul, and Jecheon in the central North Chungcheong Province.