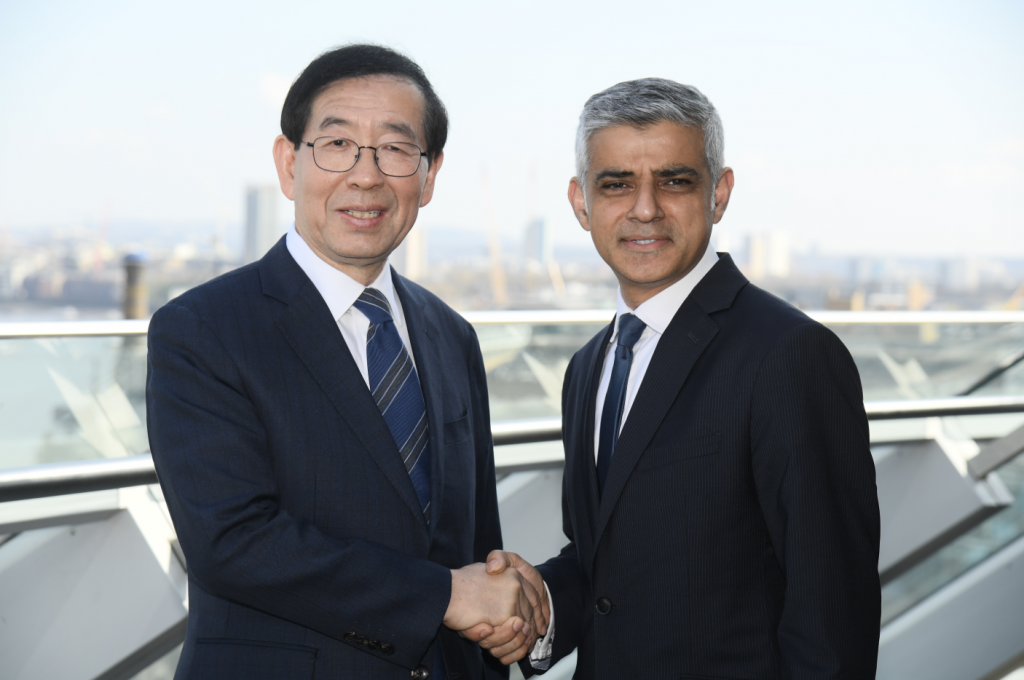 SEOUL, April 5 (Korea Bizwire) – Park Won-soon and Sadiq Khan, the mayors of Seoul and London, signed a friendship agreement at the City Hall in London Monday to cooperate in nine sectors including economic democratization, better response to climate change and digital innovation.

Monday’s agreement between the two capital cities is an extension of the pact signed in December 2015. The two chiefs met earlier on March 29 in Paris and talked over a possible implementation of a global car scoring system, which collects car emissions data to better respond to air pollution.

Park and Khan also agreed Monday to cooperate for a successful World Cities Culture Forum that is scheduled take place in Seoul in November for the first time. The conference, which incorporates 32 member cities, was first held in 2012 to discuss cultural development in urban municipalities. The South Korean capital joined the forum last year.

During the meeting, Park invited London as an official guest to the Seoul Biennale of Architecture and Urbanism planned for September, and asked the city to take part in WeGO (World e-Governments Organization of Cities and Local Governments), at which Seoul serves as the Chair City.

The park is an open-to-the-public, 843-square-meter establishment in northern Seoul that the city hopes will serve as a platform for social innovators.

Seoul is particularly interested in Locality as its European partner. Locality is a network of community-led organizations that helps restore communities with the proceeds from renovating unused lands or buildings for commercial and residential purposes.

Locality is the national network of ambitious and enterprising community-led organisations, working together to help neighbourhoods thrive. (Image courtesy of Locality.org (UK))

“Mr. Khan and I share sympathy in many different fields, and I’m hopeful that the two cities will continue to discover common interests for cooperation that benefits the citizens,” Park said.

The two mayors share similar backgrounds as former human rights lawyers and civic group members. They’re also both advocates for social unity with Park spearheading Wecomics, a social equality initiative, and Khan voicing for an unbiased government administration that benefits everyone regardless of racial or religious backgrounds.