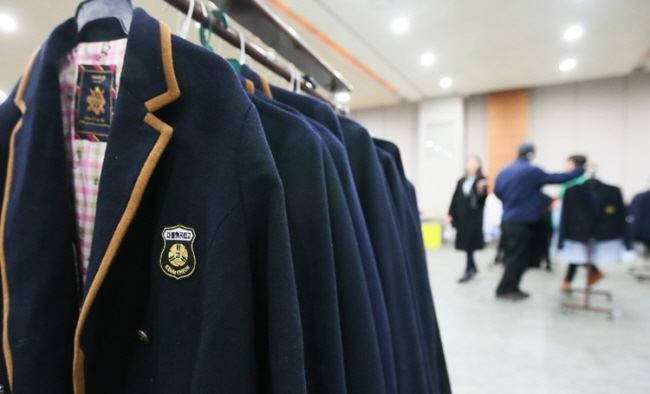 SEOUL, Jan. 17 (Korea Bizwire) — Middle schools and high schools in Seoul are now entering a round of discussions to decide whether to maintain or abolish school uniforms.

The Seoul Office of Education asked all middle and high schools on Wednesday to publicize the discussion about school uniforms.

Schools will discuss a variety of issues ranging from what uniforms to wear to the possibility of abolishing them entirely. Keeping current school uniforms is also on the table.

School uniforms are determined by school regulations. As such, each school will open an amendment committee to come up with a new draft based on a series of debates and surveys.

Once the draft is passed by the school management committee, the school principal promulgates the new school regulations.

The Seoul Office of Education asked schools to reflect more than 50 percent of student feedback when designing new school regulations.

The students can either participate as members of the amendment committee or respond to surveys that will be reflected in the new regulations.

Once the process goes as planned, it is expected that new students coming in next year will be able to enjoy the new school uniform policy.

Students currently enrolled will be able to choose between new and old school uniforms.

Schools are not obligated to publicize the issue, however. Since developing new school regulations is within the purview of the school principal, the Office of Education can do no more than make recommendations.

Currently, out of 705 middle and high schools in Seoul, 693 schools have school uniforms.

Among the schools with uniforms, 83 percent have a uniform selection committee that includes the participation of student members.

The current selection committee, however, is no more than a platform to select uniform manufacturers, with student members comprising less than 50 percent of the entire committee.

“Since each school has to discuss purchasing new school uniforms every year, we believe they will use this occasion to talk about new policies for school uniforms,” said a source from the Seoul Office of Education.