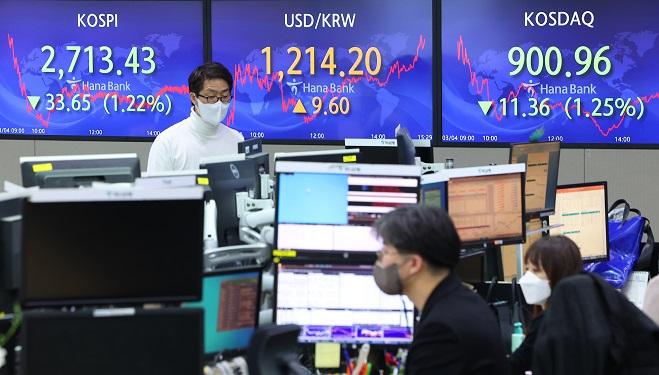 The benchmark Korea Composite Stock Price Index (KOSPI) closed at 2,744.52 points Friday, up 0.14 percent from a week ago.

The key stock index snapped its four-day winning streak Friday, as investors were spooked by a fire at a Ukraine nuclear plant and the U.S. Federal Reserve chairman’s comments on the Ukraine war’s possible impact on the U.S. economy.

Analysts said geopolitical risks surrounding Ukraine will continue to serve as major drivers of the stock markets next week.

“Russia and Ukraine agreed to hold their third talks in the near future, but (the past two talks) repeatedly pointed out the difficulties in compromising on their key differences to make a perpetual truce,” said NH Investment & Securities analyst Kim Young-hwan.

The Ukrainian government’s priority is the immediate halt of Russia’s invasion and withdrawal of Russian troops from its territory.

Russia, on the other hand, is pushing for Ukraine’s stipulated refusal to join the North Atlantic Treaty Organization and the independence of two separatist groups, the so-called Donetsk and Luhansk People’s Republics, in Donbas in eastern Ukraine.

The increasing prices of commodities and energy from the Ukraine crisis may raise costs for local firms and worsen their earnings, Kim added.

Investors are also paying keen attention to the impact of the Ukraine crisis on the U.S. Federal Reserve’s monetary policy.

On Wednesday, the Fed chairman signaled a 0.25 percentage-point hike in benchmark interest rates in March, citing the rising price pressure. But two days later, he said the geopolitical risk in Ukraine may impact the world’s largest economy.

In the coming week, the 20th presidential election will be held Wednesday, in addition to China’s February consumer price index.

The U.S. February consumer price will be released Thursday.