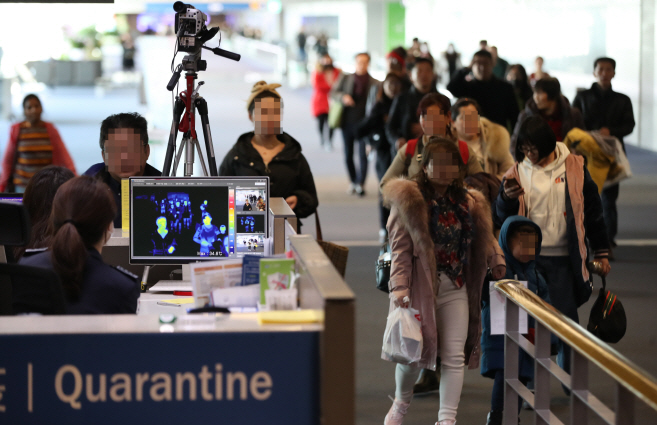 A quarantine officer uses an electronic thermometer at Incheon International Airport, west of Seoul, on Jan. 21, 2020, to check the temperature of passengers arriving by plane from Wuhan, China, and Southeast Asia. (Yonhap)

SEOUL, Feb. 14 (Korea Bizwire) — Seoul has temporarily suspended more than 81,000 visas issued by the South Korean Consulate General in Wuhan, central China, since Feb. 4, when an entry ban for non-Korean travelers from the epicenter of the new coronavirus and its surrounding Hubei Province took effect, the Ministry of Justice said Friday.

The suspension was announced by the Seoul government early this month, together with the unprecedented entry ban for all foreigners traveling from Hubei, as part of its efforts to stem the spread of the virus.

The ministry said a total of 81,589 visas issued by the South Korean mission in Wuhan have been suspended since Feb. 4 and holders of such visas were denied entry here.

It noted that 94.4 percent of the suspended visas were short-term visas issued mainly for tourists.

“Following the entry ban for foreigners from Hubei, a total of 9,520 people have not been allowed to board flights bound for South Korea through a prior verification system and monitoring by airlines,” the ministry said.

In a related move, the Seoul government also implemented a temporary suspension of a visa-free program for Chinese visitors to the southern resort island of Jeju on Feb. 4.

As a result, not a single foreigner has since entered Jeju without a visa, the ministry explained.

It said its foreigner information center has received more than 10,000 inquiry calls over the past two weeks, mainly regarding the various measures to restrain arrivals of non-Korean travelers.

“The justice ministry has been closely cooperating with the Korea Centers for Disease Control and Prevention on measures to fight the spread of the COVID-19 virus,” a ministry official said.