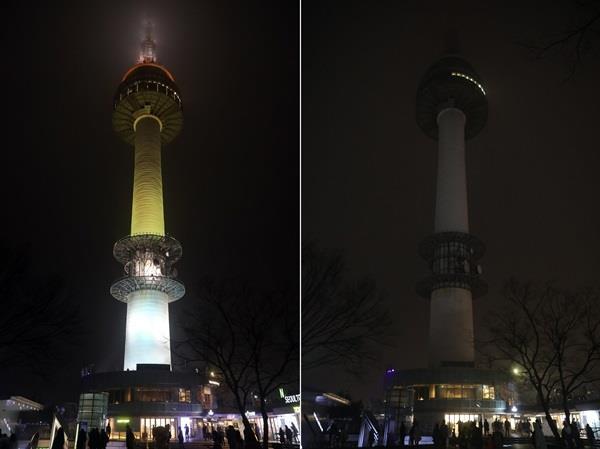 This combined image provided by the Seoul metropolitan government shows N Seoul Tower before and after their lights are turned off.

SEOUL, March 28 (Korea Bizwire) — Seoul, the South Korean capital, will join the global lights-out campaign Earth Hour in turning off its lights for an hour Saturday, the municipal government said.

Seoul landmarks including Lotte World Tower, N Seoul Tower, the 63 Building and bridges over the Han River will go dark from 8:30 p.m., according to the Seoul Metropolitan Government.

But the lights in Seoul City Hall, where the city’s situation room is dealing with the coronavirus outbreak, will remain on, it added.

Launched by the World Wide Fund for Nature in 2007, Earth Hour is aimed at raising public awareness of climate change.

This year, about 180 countries across the world will participate in the lights-out movement.