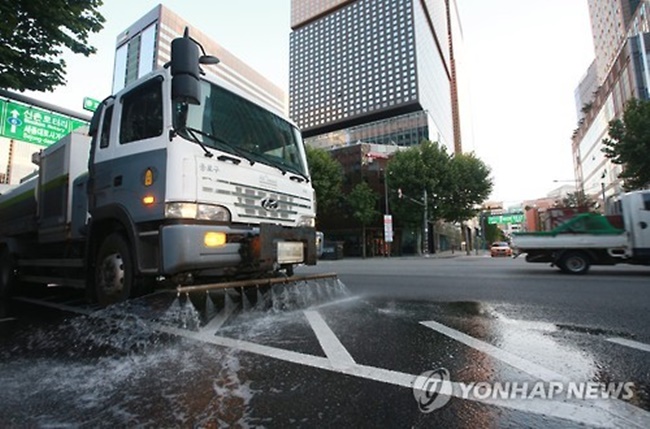 However, with Seoul’s latest move to treat days with high-level fine dust alerts the same as natural disasters, residents in the capital are expected to see an increase in the use of street sweeper trucks. (Image: Yonhap)

SEOUL, April 10 (Korea Bizwire) – The Seoul Metropolitan Government announced plans yesterday to use fire hydrants to clean the streets when find dust warnings are issued, after officials decided to consider fine dust as a natural disaster.

Currently, there are 202 street sweeper water trucks in Seoul, but a lack of water supply has seen only 60 trucks in operation.

According to the Framework Act on Fire Services, use of fire hydrants is only allowed in the case of emergencies such as natural disasters or fires. The same act also prevented Seoul mayor Park Won-soon from providing police with water for the use of water cannons.

The Seoul government has been criticized in the past for its inability to supply water to street sweepers, with nearly ten districts having to borrow water for cleaning use from other districts.

One official at the Seoul government expressed frustration towards the lack of water supply, saying, “(The current situation) limits our efforts to expand street-sweeping work using water.”

However, with Seoul’s latest move to treat days with high-level fine dust alerts the same as natural disasters, residents in the capital are expected to see an increase in the use of street sweeper trucks.

A fine dust warning is issued when 150 micrograms of fine dust particles per cubic meter of air has been detected for longer than two hours.

“The Seoul Metropolitan Fire & Disaster Headquarters has agreed to allow 692 fire hydrants in Seoul to be used in case of fine dust warnings. We expect to maximize the effect of this measure by utilizing as many street sweepers as possible,” the Seoul government said.