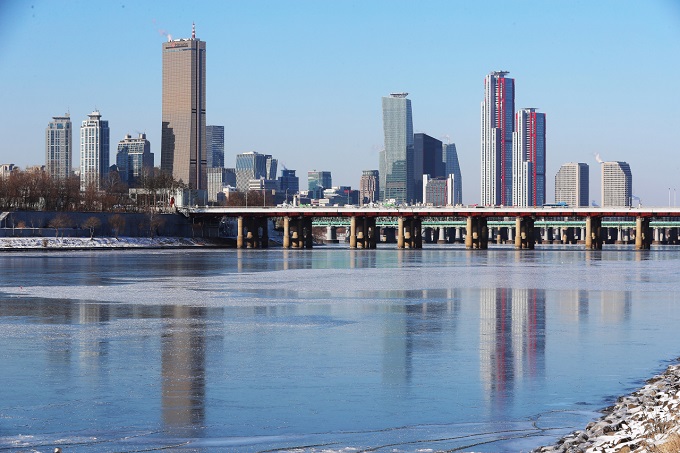 The season’s first ice formation is spotted on the Han River that runs through Seoul on Jan. 9, 2021. (Yonhap)

SEOUL, Jan. 9 (Korea Bizwire) — The Han River, which runs through Seoul, was declared officially frozen on Saturday for the first time in two years, the weather agency said, as South Korea has been gripped by a severe cold wave in recent days.

The Korea Meteorological Administration (KMA) announced that it has observed the season’s first ice formation on the Han River Saturday morning, as the capital’s morning low tumbled to minus 16.6 C.

The freezing of the Han River was four days earlier than the 30-year average and spotted for the first time in two years, as ice did not form on the river last year due to a warm winter, KMA explained.

The observation of freezing of the Han River began in 1906 and is based on ice formation around piers in the middle of the Hangang Grand Bridge, the oldest overpass over the river.

Seoul and many other central areas have been put under a cold wave warning since Wednesday, as daily lowest temperatures dipped below minus 20 C.

A cold wave warning is issued when the morning low is below minus 15 C for more than two consecutive days, or when the temperature drops sharply and major damage is expected.

Saturday’s morning lows dipped to minus 26.2 in Cheorwon and minus 22 C in Chuncheon, both in Gangwon Province; minus 24.4 C in Yeoncheon, minus 21.5 C in Paju and minus 18.6 C in Suwon, all in Gyeonggi Province surrounding Seoul; minus 17 C in Daejeon; and minus 15.2 C in Gwangju, KMA said, adding their sensible temperatures were three to four degrees lower. 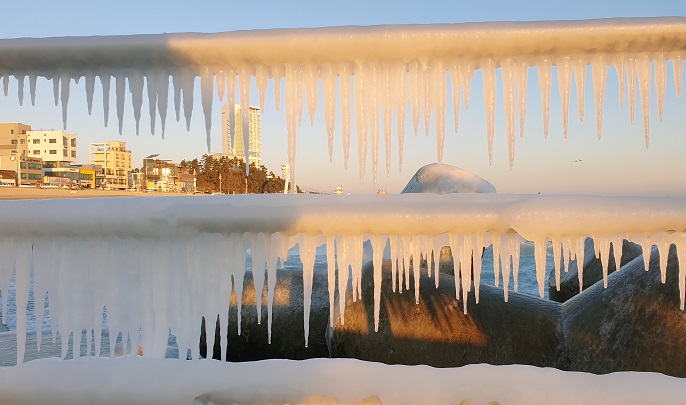 The southern region was not an exception to the ongoing cold spell, which has been caused by a southward inflow of cold air from near Siberia.

In Busan, where the daily lowest temperature dropped below minus 10 C, ice formation was officially declared for the Naktong River that runs through the southeastern port city for the first time in three years, KMA said.

Earlier on Wednesday, Busan’s daily lowest temperature dipped below minus 12 C for the first time in a decade.

The weather agency also issued a heavy snow warning for mountains and many other parts of Jeju Island, where the morning low was minus 2.1 C.

It said the ongoing cold wave is expected to continue nationwide through next Tuesday or Wednesday.

The prolonged cold wave has caused extensive damage to people’s health and property across the country, authorities said.

According to the Central Disaster and Safety Countermeasure Headquarters, 15 people have fallen ill with cold-induced diseases, such as hypothermia and frostbite, and 37 others have been rescued as of 10:30 a.m., while over 2,400 cases of freezing and bursting of water meters and other facilities have been reported nationwide.

Multiple power outages affected about 78,000 households in Seoul and Incheon on Friday night. In the southwestern town of Gochang, 87,000 gray mullets perished at a fish farm.