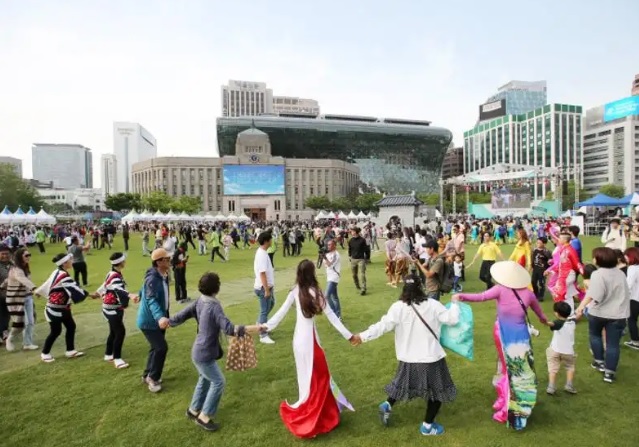 The annual “Seoul Friendship Festival (SFF) 2018″ will take place in the three locations in the capital — Seoul Plaza, Mugyo-Ro and Cheonggyecheon-Ro — Saturday and Sunday, featuring music and dance performances from 15 sister cities worldwide, various foods from all around the world and a street parade of about 70 participating countries.

The SFF is Seoul’s largest multicultural festival and was first held in 1996. The event was called Seoul Friendship Fair until last year, but changed to the SFF this year to better stress cultural exchanges between Seoul and its sister cities worldwide, the officials explained.

The SFF will start with a parade of world cities at Mugyo-Ro at 3 p.m. Saturday, which will include a traditional Korean orchestra, bearers of flags of 70 participating countries and performance teams of 15 sister cities.

The world food fair slated for noon to 6 p.m. Saturday and noon to 5 p.m. at Mugyo-Ro and Cheonggyechon-Ro will feature Indian tandoori chicken, Turkish kebabs, Swiss rosti, Chilean empanada and Honduran yuka, among others.

The cultural performances, set to be held at Seoul Plaza’s main stage at 5 to 9 p.m. Saturday and 12:30 to 6 p.m. Sunday, will feature a team of cheerleaders from Los Angeles, a martial arts team from China, Wellington’s Maori dance team and a traditional dance team from Maputo of Mozambique.

Fifty-three countries will participate in the world culture & tourism fair, where they will set up booths at Seoul Plaza to promote their respective tourism content and sell various traditional props and craftworks.

In addition, the U.N. Refugee Agency, Greenpeace, Save the Children and other international organizations will publicize their activities during the festival, the officials said. For further information, visit the event’s website at seoulfriendshipfestival.org.