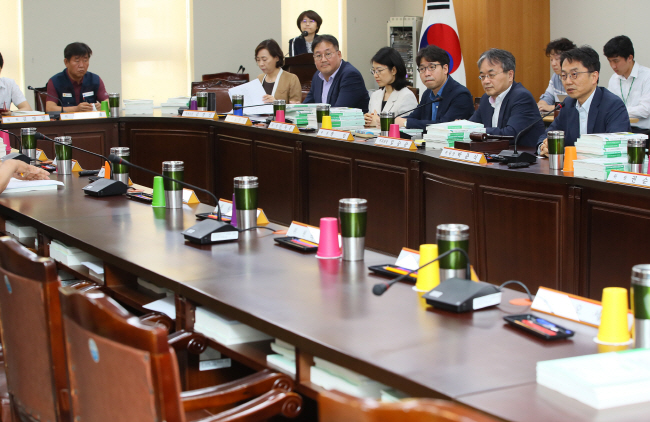 The Minimum Wage Council holds a plenary session to deliberate on next year’s minimum wage on July 2, 2019, in the administrative city of Sejong, with representatives from the business sector boycotting the meeting. (Yonhap)

SEOUL, Jul. 3 (Korea Bizwire) — South Korea faces the task of setting next year’s minimum wage at an optimal level that can be more acceptable to divergent groups amid criticism that steep hikes in the hourly pay have weighed on job growth, experts say.

The Minimum Wage Council, involving business and labor representatives and experts, is deliberating on the 2020 minimum wage amid calls by the business sector for freezing the wage.

A wage decision is widely expected to come out in mid-July.

President Moon Jae-in in his election pledges vowed to raise the minimum wage to 10,000 won (US$8.57) per hour by next year.

But the 2020 minimum wage is expected to be set below 10,000 won since Moon has signaled at some flexibility amid backlashes from smaller firms and mom-and-pop stores over its steep hikes.

“The government will do its best to enable the council to review a wage decision by comprehensively taking into account economic and job situations and living costs,” Labor Minister Lee Jae-kap said at a meeting with businesspeople from small and medium-sized enterprises on May 29.

The minimum wage hikes are intended to increase household income under Moon’s signature economic policy of income-led growth that calls for a virtuous circle of increases in consumption and economic growth.

Income gaps among workers sharply improved last year as the minimum wage raises helped boost the earnings of the lowest income bracket, according to the labor ministry.

But the hikes also had the unintended effect of hampering job growth as smaller firms have dismissed many part-time workers in response to growing labor costs.

Heralding tough negotiations, the labor and business representatives are staging a tight tug-of-war more intensively than ever.

“A focal point will be placed on whether the country would set a minimum wage that could enhance social acceptability, not bounded by Moon’s election pledges,” Kwon Hyuk, a professor at Pusan National University Law School, said.

The labor sector proposed 10,000 won for next year’s minimum wage on Tuesday, saying that the Korean economy can fully accommodate that level. It represents a 19.8 percent rise from this year’s hourly pay.

“We need a shift of thoughts. Companies that depend on low incomes and long hours of labor should not dominate anymore,” the labor sector said. 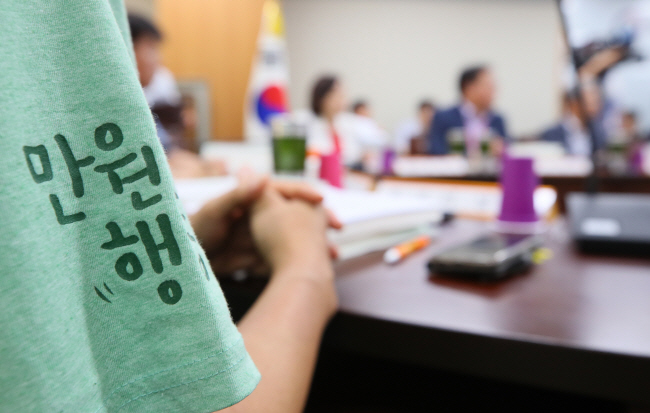 A T-shirt with a phrase calling for a 10,000-won minimum wage worn by a representative from the labor sector attending a meeting of the Minimum Wage Council. (Yonhap)

The business sector is expected to propose a freeze for the second consecutive year, citing mounting labor costs.

Business representatives boycotted the latest deliberations twice after the council voted down their demand to allow companies to set minimum wages differently, depending on industries.

Even if the labor and business sectors reach a compromise soon, a set of contentious issues are likely to linger in a future wage decision.

Major umbrella labor groups denounced the 2018 parliamentary passage of a bill that allows some regular bonuses and welfare allowances to be calculated as minimum wage.

They said the move watered down the effect of the wage hike.

The labor circle is demanding measures that can compensate for an expected fall in income due to the bill passage.

It also insists that the costs of living by households should be calculated in a wage decision, instead of that of a single worker.

A proposal to overhaul the decision-making process for setting the minimum hourly pay rate is another bone of contention.

Under the government’s proposal, the wage council will have two subcommittees tasked with setting the legal upper and lower thresholds and deciding on the actual rate, respectively.

A group of experts is expected to set the range, and later, the labor and business sectors will set an actual wage level within the range.

A controversy lingers over whether the proposal could guarantee fairness in setting the wage. A relevant bill is still pending at the National Assembly amid partisan tensions.

“To enhance acceptability, we need to come up with calculation-based measures that take into account many economic factors. Then, if the labor and business sectors launch wage negotiations with such objective data, it may be possible to reduce repeated tensions and social conflicts,” he added.