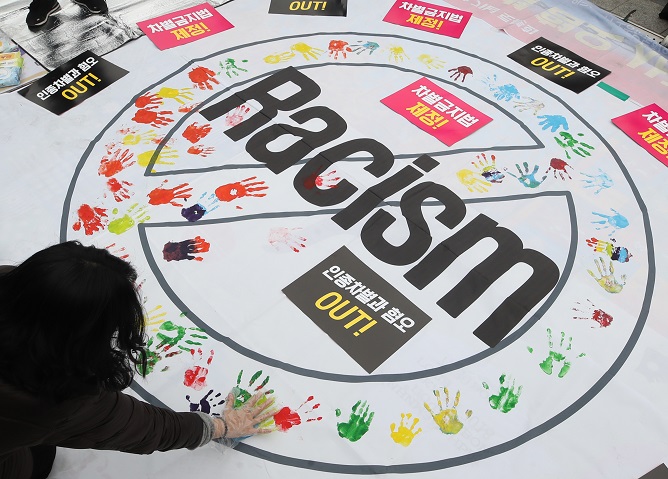 This March 18, 2018, photo shows a protester making a handprint during an anti-racism rally in Seoul. (Yonhap)

The National Human Rights Commission of Korea unveiled the results of its first annual survey on human rights conditions in the country, conducted with 13,077 adults across the country between August and September in 2019.

Regarding the level of human rights violations, 54 percent said it is “serious” while 46 percent answered “not serious.”

As for groups they believe to be suffering most from rights violations and discrimination, 29.7 percent picked the disabled, followed by immigrants (16.4 percent), the elderly (13.4 percent) and women (13.2 percent).

Regarding groups they think to be most likely to face rights violations and discrimination, 29.6 percent chose the poor class, followed by those with low levels of education (18.9 percent), ex-convicts (16.2 percent) and non-regular workers (12.9 percent).

But 71.3 percent of respondents said they sense their own human rights are respected while 28.7 percent do not feel so.

Also, 61.4 percent said human rights are generally respected in society while 38.6 percent answered the opposite.