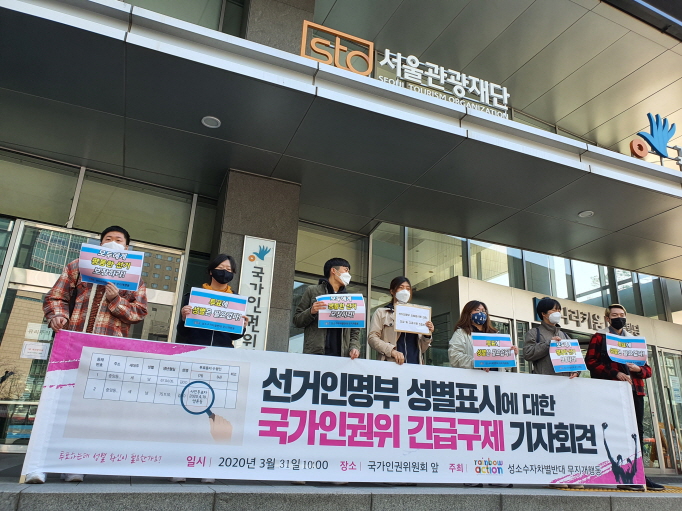 Members of Rainbow Action, an activist group for sexual minorities, hold a news conference in front of the National Human Rights Commission of Korea building in Seoul on March 31, 2020. (Yonhap)

SEOUL, April 1 (Korea Bizwire) — Ahead of the April 15 parliamentary elections, there have been calls for the removal gender designations from the electoral register to prevent sexual minorities from having their basic rights violated.

The Rainbow Action, an activist group for sexual minorities, held a press conference in front of the National Human Rights Commission of Korea building Tuesday and said it would apply for a petition and emergency relief from the commission for the gender designation on electoral votes.

Under the current Public Official Election Act, gender is listed on the voting list that is compiled to identify those who have the right to vote.

Therefore, the group pointed out that there is a problem in which sexual minorities have to disclose their dichotomous legal gender that has been unintentionally divided into men and women in the process of confirming their identity at polling stations.

Currently, the National Election Commission recognizes student ID cards that are not marked by gender as the type of ID that voters should bring to the polls, as well as certificates issued by state agencies.

Therefore, there is no legitimate need to collect and disclose gender information, given that gender is not essential information for identification, the group added.

“The same was true in the 2018 survey conducted by the Commission, which showed that one third were giving up their right to vote,” Park stressed.