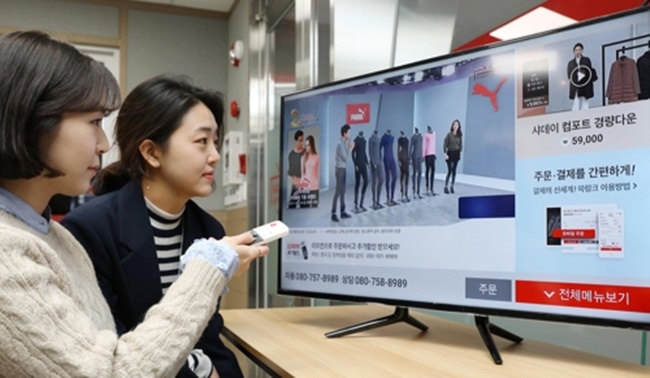 The bold move by the television-based South Korean e-commerce channel service will begin on Monday on olleh tv, where a small screen showcasing another product will appear next to the main program. (Image: Shinsegae TV Shopping)

SEOUL, Nov. 27 (Korea Bizwire) – Shinsegae Shopping has announced it will display two items together via a split screen to present more choice to customers.

The bold move by the television-based South Korean e-commerce channel service will begin on Monday on olleh tv, where a small screen showcasing another product will appear next to the main program.

Shinsegae’s new ploy uses the top of the screen where other data or information traditionally appears, and the additional images depicting other items will be remote controlled by viewers.

It’s the first time in the South Korean shopping channels industry that a multiplex system was adopted.

In addition, Shinsegae TV Shopping is introducing SSG link, a brand new mobile payment system that has drastically simplified the process for customers.

Previously, customers had to endure a tedious process to purchase items on the channel that consisted of a total of six steps, including texting a phone number and returning a text with product information.

However, with SSG link, customers won’t have to register contact information each time, and can complete payment through three simple steps, which involve choosing a mobile payment on TV and confirming the order from the phone.

Prior to SSG link and the multiplex system, Shinsegae TV Shopping introduced a new shopping program under the concept of ‘shopping at E-mart through TV’ earlier this month, which allows people to order popular and fresh E-mart items from home.

“Shinsegae TV Shopping is continuing efforts to lead the T-commerce industry, by introducing a number of new services in various fields including a multiplex broadcasting system, the simple payment system SSG link, and E-mart TV Shopping,” said Kim Goon-sun, the CEO of the shopping channel to explain the company’s latest business strategy.

Sales at the home shopping channel are projected to reach 300 billion won this year, which is more than double the figure from last year, according to the company on Sunday, brewing speculation that in the fourth quarter of this year, the shopping channel could turn a profit for the first time since its establishment in 2015.