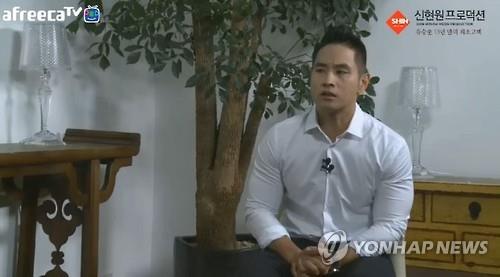 SEOUL, May 20 (Korea Bizwire) — A Korean-born American pop star publicly apologized Tuesday for evading compulsory military service 13 years ago and appealed for a chance to get back to Korea to correct his past misdeeds.

Steve Yoo, who is better known as Yoo Seung-jun in Korea, was banned from entering the country after acquiring U.S. citizenship amid speculation that he did so in order to evade conscription.

“I’m sorry for causing troubles and I apologize for greatly disappointing you,” the 38-year-old said on a program that was broadcast live on a South Korean online video-sharing service Tuesday night.

“If I can return back to the past, I’ll enlist into the Army without a second thought… I want to step on Korean land without guilt, along with my children, in some way or other.”

In South Korea, all able-bodied young men are subject to compulsory military service for about two years.

Before starting the one-hour-long interview, Yoo knelt down and sobbed for minutes in a gesture of deep apology.

But the Ministry of Justice has downplayed the possibility that Yoo may return to the local music scene when local news media reported on Yoo’s plan to appeal for leniency on the Internet TV program.

The ministry said it is not considering lifting the entry ban or allowing him to regain his Korean nationality.

He debuted in the K-pop scene in 1997 with “Scissors” and later became one of the biggest-selling artists in Korean history, selling more than 5 million records in the country.

Since the entry ban was imposed, he has pursued an acting career in China, appearing in 14 films and a 60-episode television drama.