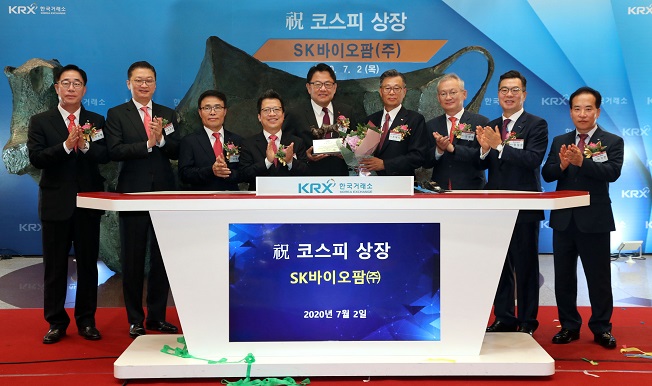 The company’s market cap stood at 9.95 trillion won, the 27th most-valued stock on the main bourse.

“Bio stocks are likely to fare better amid the prolonged impact from the COVID-19 pandemic, with major economies pushing various monetary easing and stimulus packages to keep the low-interest environment,” he added.

The drugmaker raised some 960 billion won via IPO, the largest stock offering of the year. The IPO offering also marks the highest since the 1 trillion-won IPO deal by Celltrion Healthcare in 2017.

Prior to its IPO, investors rushed for SK Biopharmaceuticals for its growth potential amid the coronavirus pandemic. They chipped in 31 trillion won in deposits to buy its stocks, the largest in the country’s IPO history.

“SK Biopharmaceuticals will accelerate into the global pharmaceutical company through the IPO,” CEO Cho Jeong-woo said.

The company, which specializes in the research and development of treatments for disorders, currently has two indigenous drugs with the U.S. Food and Drug Administration (FDA) approvals.

It was the first South Korean company to independently develop an anti-epileptic drug, Cenobamate, and to receive a green light from the FDA.

Its novel sleep disorder drug, named solriamfetol, is also available in both the United States and Germany.

The drugmaker was spun off in 2011 from the life science unit of SK Group that holds a 75 percent stake.