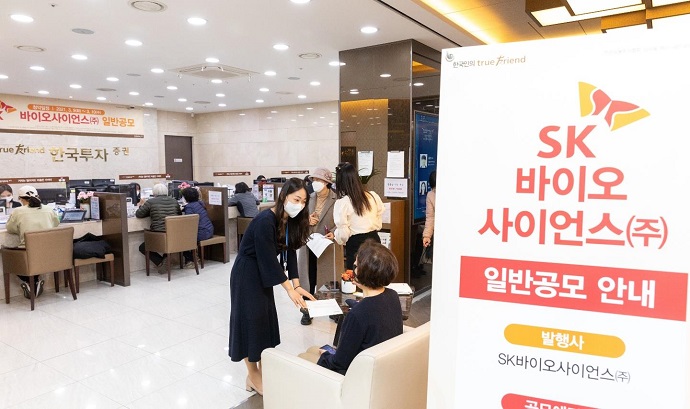 A notice is set up at a brokerage office in Seoul on March 9, 2021, to inform potential investors of the public subscription of shares to be sold by SK Bioscience Co. in an initial public offering. (Yonhap)

SK Bioscience, a unit of South Korea’s No. 2 family-controlled conglomerate SK Group, has allowed individual investors to subscribe to up to 2.29 million new common shares to be sold under the planned IPO.

SK Bioscience has set the IPO price at 65,000 won (US$57) per share, which puts its corporate value at about 5 trillion won.

Last week, SK Bioscience conducted a demand forecast for institutional investors, which found the portion of shares offered to public investors would be 1,275.47 times oversubscribed.

SK Bioscience engages in developing COVID-19 vaccines and produces vaccines on behalf of other drug companies.

The company has started a clinical trial of its own vaccine candidate, while it has signed deals with AstraZeneca, Novavax and other global pharmaceutical firms to produce vaccine candidates for them.

NH Investment Securities Co. and five other companies will receive subscriptions from public investors for SK Bioscience shares slated to be listed on the local bourse on March 18.