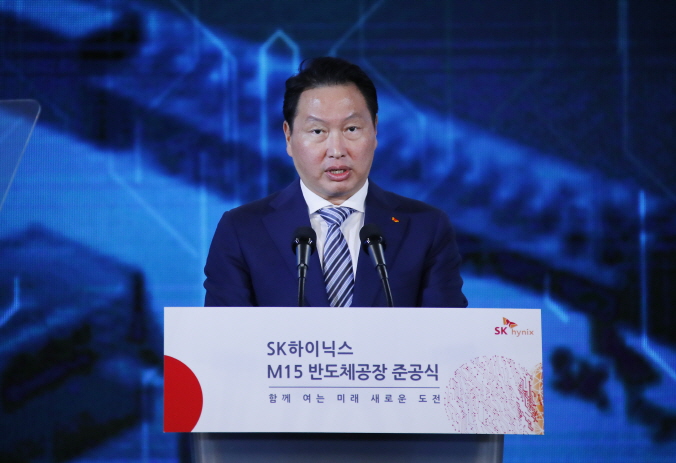 The company said the new M15 line in Cheongju, located 140 kilometers south of Seoul, covers 60,000 square meters and will play a key role in bolstering the competitiveness of South Korea’s chip industry as a whole.

SK hynix plans to continue to invest more in the line going forward. A detailed timetable for future expansion will depend on market conditions, it added.

Full operation at the plant is expected to begin as early as later this year.

The chipmaker first announced the plan to build the M15 line in December 2016 and started construction in April 2017.

“The company believes it owes the country and the regional community as it has emerged as a global leader in semiconductors with high-end production facilities,” SK Group Chairman Chey Tae-won said.

Chey said SK Group, including the chipmaker, will continue to make more contributions to society.

The company said it will share its infrastructure with other businesses or governmental organizations and stressed it plans to make itself into a “social company” as well.

SK purchased the chipmaker, then Hynix, in 2012.

Chey claimed that SK hynix will continue to maintain its competitiveness in the chip industry, which is also crucial for the national economy.

SK hynix is currently the world’s No. 2 DRAM maker following Samsung Electronics Co., although it ranks fifth in the NAND flash market. The chipmaker is seeking to expand its market share of NAND flash products through the M15 line.

The chipmaker said around 160 firms already participated in the construction of the M15 line.

“The demand for memory chips will continue to rise amid the expansion of the fourth industrial revolution, including big data, artificial intelligence, fifth-generation networks and self-driving technologies,” a corporate official said.

Another official said the company will ease dependency on DRAM products and continue to make efforts to diversify its portfolio.

SK hynix added that although the supply cannot jump sharply in a short time as seen in the past, it will continue to respond to market demand in a speedy manner.

The company has not officially revealed the production capacity of the M15 line. Industry watchers, however, estimate the new line will produce around 200,000 sheets monthly, similar to that of the M14 line located in Icheon, 80 kilometers south of Seoul.

President Moon Jae-in was present at the event along with Finance Minister Kim Dong-yeon and Industry Minister Sung Yun-mo.

“The chip industry is the engine of the South Korean economy,” Moon said, claiming the country needs to continue to beef up its capabilities amid the rise of rivals from China and the United States.