The two companies signed a memorandum of understanding on the joint venture, called BlueOvalSK, to build a battery factory with 60 gigwatt hours (GWh) of production in the U.S. by the mid-2020s.

SK Innovation, a refinery-and-battery unit under South Korea’s No. 3 conglomerate SK Group, has been building a $2.6 billion battery factory in Georgia, which will supply batteries for Ford’s F-150 EVs from next year.

SK Innovation aims to expand its global battery production capacity to 85 GWh in 2023 and over 125 GWh by 2025, and the joint venture will expand the capacity to 190 GWh in the next five years, it said.

The joint venture deal comes after SK Innovation last month agreed to pay $1.8 billion to its bigger home rival LG Energy Solution to settle a battery trade secret case, which had clouded its EV battery business in the U.S.

The settlement averted the worst-case scenario for SK, which would have had to abandon its Georgia factory if the 10-year import ban took effect, weighing on the Biden administration’s EV push.

“The joint venture is expected to play a key role in the U.S. administration’s strong drive for the EV industry value chain,” SK Innovation CEO Kim Jun said in a joint statement. 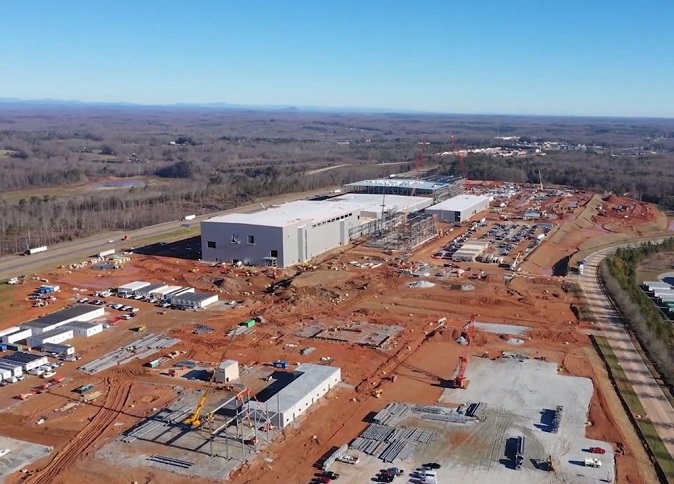 The SK-Ford partnership is expected to be similar to what LG Energy has with another American automaker, General Motors Co., with the two jointly building battery factories in Ohio and Tennessee.

Ford has said it will invest $22 billion in electrification by 2025, vowing to step up efforts to build its own batteries for stable supply of the key component.

“This MOU is just the start; it’s a key part of our plan to vertically integrate key capabilities that will differentiate Ford far into the future,” said Jim Farley, Ford president and CEO. “We will not cede our future to anyone else.”

The battery deal is expected to spice up the upcoming bilateral summit as Biden has made boosting EVs a top priority for his $2 trillion infrastructure plan.

Biden pitched his $174 billion EV proposal during his visit to Ford’s EV plant in Michigan earlier this week, and Moon plans to stop over at SK Innovation’s Georgia plant on his way back home.

SK Chairman Chey Tae-won will also visit the Georgia plant during his U.S. visit this week, according to company officials.