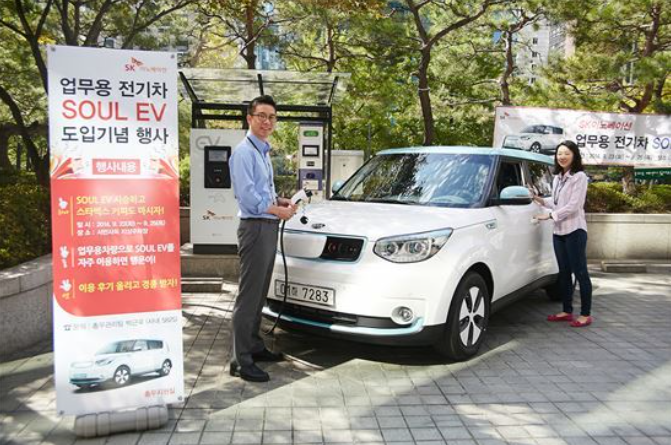 The company said it will expand cooperation with Chinese partners to target the fast-rising market in the next five years as Beijing is promoting eco-friendly cars to cut CO2 emissions with subsidies for EVs. (image courtesy of SK Innovation)

SK Innovation has been pushing for the EV battery business since 2008, building the first battery plant in Seosan, 150 kilometers south of Seoul, in 2012 and recently doubled its capacity to 700 megawatts, which is capable of providing batteries for 15,000 vehicles a year.

The company said it will expand cooperation with Chinese partners to target the fast-rising market in the next five years as Beijing is promoting eco-friendly cars to cut CO2 emissions with subsidies for EVs.

“Our goal is to supply batteries for 20,000 vehicles produced by Kia Motor and Beijing Automotive Industries Holdings this year,” Kim Hong-dae, the director of Battery & Information and Electronic Materials, told reporters who visited the plant. “SK Innovation will step up the current partnership to tap deeper into the battery market at home and abroad.”

The EV battery market is expected to grow to an estimated US$18.24 billion by 2020, according to B3, a Japanese market research firm specializing in lithium-ion batteries.

The expanded investment in the battery business came at a time when the refiner suffered an operating loss for the first time in 37 years in 2014 as plummeting oil prices led to losses in value of crude stockpile and squeezed cracking margins.

Despite its ambitious pledge, a tough road lies ahead of SK Innovation, which has mainly focused on the refining and petrochemical business, as the EV market still remains highly volatile.

The current models haven’t reached a quality threshold that makes them attractive to consumers with their slow battery charging times and lack of infrastructure in emerging nations. Major automakers haven’t been able to reach the break-even point in their EV business.

The firm also has to face tough competition with market leaders at home and abroad.

In South Korea, LG Chem Ltd., a major chemicals and battery firm under LG Group, and Samsung SDI Co., a chemical unit under Samsung Group, are the top two EV battery producers that have clinched several deals with leading automakers over the past years.

“So far, supplies have been exceeding demands. But the trend is expected to shift starting from 2018,” Kim said. “Although there are challenges for the battery business, we will focus on developing highly-efficient, affordable battery technology to reap profits in the next two or three years.”